5 Powerful Bible Verses From The Book Of Joshua

Here are 5 powerful Bible verses from the Book of Joshua.

Joshua 1:5 “No man shall be able to stand before you all the days of your life. Just as I was with Moses, so I will be with you. I will not leave you or forsake you.”

Just after the passing of Moses, the nation of Israel must have had concerns because Moses had been the only leader that they had ever known but now the mantle had been passed on to Joshua and perhaps the people and maybe even Joshua had some anxiety about the future and so God reassures Joshua that no one will be able to stand before them. Why? Because God is to be with them for the rest of their lives and just as God was with Moses, He will be with Joshua too, telling him that He “will not leave you or forsake you.”

Three times in Joshua 1 God tells Joshua to be strong and to be courageous because he’ll need to be for what’s coming later. God also adds the command to not be frightened or dismayed and for one reason only; “the Lord your God is with you wherever you go.” If you are going someone and into some situation that is unsettling, it’s comforting to know that God is with you wherever you go too.

Joshua 24:15 “And if it is evil in your eyes to serve the Lord, choose this day whom you will serve, whether the gods your fathers served in the region beyond the River, or the gods of the Amorites in whose land you dwell. But as for me and my house, we will serve the Lord.” 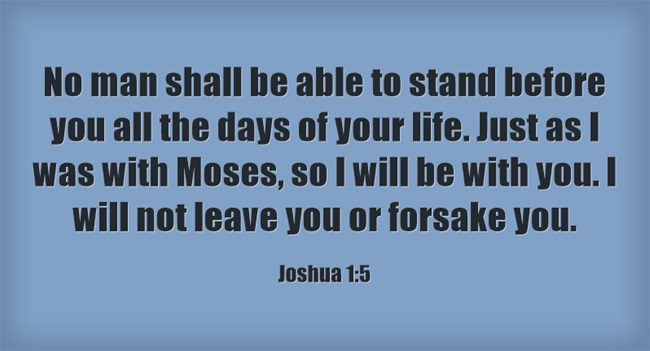 Joshua 1:6-7 “Be strong and courageous, for you shall cause this people to inherit the land that I swore to their fathers to give them. Only be strong and very courageous, being careful to do according to all the law that Moses my servant commanded you. Do not turn from it to the right hand or to the left, that you may have good success wherever you go.”

This is an instruction for Joshua to again, be strong and courageous but to also use great care in doing everything that Moses had earlier commanded in the law of God. There can be no deviation from obedience and we cannot turn to the left or to the right in order to avoid the law. Staying on the road to success means staying out of the ditches and then and only then “good success [will go] wherever you go.”

Joshua 1:8 “This Book of the Law shall not depart from your mouth, but you shall meditate on it day and night, so that you may be careful to do according to all that is written in it. For then you will make your way prosperous, and then you will have good success.”

God makes it clear what their prosperity and success is dependent upon. It depends upon whether they depart or not form the Law of God and one way to not depart from it is to “meditate on it day and night” in order that “you may be careful to do according to all that is written in it.” If they do, then God says, “you will make your way prosperous, and then you will have good success.” It is simply a matter of cause and effect. Meditate and obey God’s Law or depart from it and suffer the consequences. Anyone that ignores God’s Law, Paul can only say that it is “because of your hard and impenitent heart you are storing up wrath for yourself on the day of wrath when God’s righteous judgment will be revealed” (Rom 2:5) and know for certain that “He will render to each one according to his works” (Rom2:6) either during this life but mostly after death when the judgment of God comes (Heb 9:27).

The first chapter of the Book of Joshua is very encouraging. You might notice that several of the most powerful verses come in chapter one and just after Moses had died. In times like these, when times of great change come, it is a time that we need the reassurance of God and to know that He is never going to leave us, forsake us, and will always (or forever) be with those who have repented and trusted in Christ. For those who refuse to believe in Christ, there is only the piling up or storing up of the wrath of God that Jesus says abides on everyone who rejects Him (John 3:36b) because “Whoever believes in him is not condemned, but whoever does not believe is condemned already, because he has not believed in the name of the only Son of God” (John 3:18). Don’t like that truth? Take it up with the Lord. This isn’t an opinionated talk show with worthless opinions flying around everywhere. This is God speaking and if you reject God, you are forever separated from God (Rev 20:12-15) so Jesus says, “unless you repent, you will all likewise perish” (Luke 13:3).