Here are seven Bible verses about taking people to court.

First Corinthians 6:1 “When one of you has a grievance against another, does he dare go to law before the unrighteous instead of the saints?”

This might be one of the most scathing rebukes that the Christians ever received and it had to do with dragging another person in the court to settle something that should have been settled out of court. We don’t know all of the details but apparently the Corinthian’s were acting just like the pagans of the world who do this sort of thing all the time and usually over frivolous things. Why should a Christian dare to do such a thing. Wouldn’t it be better to be wronged that to fight before the unsaved for something that will pass away anyway?

James 2:5-6 “Listen, my beloved brothers, has not God chosen those who are poor in the world to be rich in faith and heirs of the kingdom, which he has promised to those who love him? But you have dishonored the poor man. Are not the rich the ones who oppress you, and the ones who drag you into court?”

James doesn’t appear to be talking to Christians in the stern rebuke, but to the rich. Yes, some of the early Christian’s were rich, at least in comparison to the others, but James is writing directly to the rich, most likely the unsaved rich who became rich at the expense of the poor. The rich who only want more would rather take something to court and spend more than what they are fighting for, rather than admit they are wrong. That’s what riches do to a person. Money so corrupts their thinking that all they see is dollar signs and the pride behind it takes them beyond common sense, just so that they can prove their point. They don’t care if the poor are hurt. They are only concerned with their idol, which is money.

Proverbs 25:8-9 “Do not hastily bring into court, for what will you do in the end, when your neighbor puts you to shame? Argue your case with your neighbor himself, and do not reveal another’s secret.”

When Solomon wrote this, apparently they were dragging each other into court and doing so hastily, likely out of anger (which is pride centered). What seems to have happened is that they brought something into court without much thought, and then, to their shame, they lost the case. It is better to go to your neighbor in private than drag it in front of others and be humiliated and even worse, reveal another’s secret. 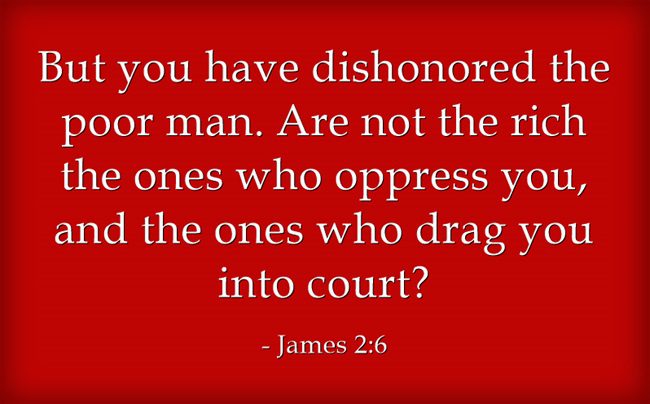 Matthew 10:17-18 “Beware of men, for they will deliver you over to courts and flog you in their synagogues, and you will be dragged before governors and kings for my sake, to bear witness before them and the Gentiles.”

This is where Jesus warned His disciples that they someday, they would be arrested and taken to court and publically flogged for proclaiming the gospel. It did happen in the early church where Peter and the disciples were charged and told to keep from speaking about Christ and then flogged. They knew they hadn’t broken any Roman laws and so they said “We must obey God rather than men” (Acts 5:29). This is happening today all around the world and it is coming to a court, I fear, near us someday.

First Corinthians 4:3 “But with me it is a very small thing that I should be judged by you or by any human court. In fact, I do not even judge myself.”

The Corinthians weren’t actually dragging the Apostle Paul into court; rather they were judging him because of the Judiazers. Paul wrote “I am not aware of anything against myself, but I am not thereby acquitted. It is the Lord who judges me” (1st Cor 4:4), so don’t worry if others judge you; we have one judge and He will judge righteously, unlike the court systems we have today, and those who judge us by sight without really knowing us misjudge us.

Matthew 5:40 “And if anyone would sue you and take your tunic, let him have your cloak as well.”

Jesus was trying to teach His disciples that it’s better to suffer wrong than to sue someone for something you’ve given or loaned to them. For example, is a tunic worth going to court over. You can read the righteous indignation of Paul where he wrote; “I say this to your shame. Can it be that there is no one among you wise enough to settle a dispute between the brothers, but brother goes to law against brother, and that before unbelievers? To have lawsuits at all with one another is already a defeat for you. Why not rather suffer wrong? Why not rather be defrauded” (1st Cor 6:5-7)?

First Corinthians 6:2 “Or do you not know that the saints will judge the world? And if the world is to be judged by you, are you incompetent to try trivial cases?”

Since the Bible teaches that the saints shall be part of the righteous rule and judgment of the world, why can’t we seem to judge matters between ourselves, and over far less important things than what’s to come in the future kingdom. Paul acknowledges that these are “trivial cases,” and even if one party wins, they really lose because they show their incompetence about even knowing when to bring a matter before a civil magistrate.

There are so many TV court shows today that it’s ridiculous. It show’s people’s obsession with wanting to see people fight over frivolous things. These people are fighting or suing one another over things that are not that important. Can we not all get along? No, I guess not, because without the Spirit of God, we are doing what our true father does, the Devil. And there are no shortages of lawyers who are willing to take anyone to court, even over the most minor things. It’s just what pagans do. Christians however, have no excuse.