Here are seven of the top Bible verses about Esther.

Esther 2:17 “The king loved Esther more than all the women, and she won grace and favor in his sight more than all the virgins, so that he set the royal crown on her head and made her queen instead of Vashti.”

After Queen Vashti was kicked off the throne for refusing to obey King Ahasuerus’ command, he began searching for another queen. After a time, Esther passed before him and it wouldn’t only be the king that she found favor in, but “Esther was winning favor in the eyes of all who saw her” (Esther 2:15). After she was made queen, “the king gave a great feast for all his officials and servants; it was Esther’s feast. He also granted a remission of taxes to the provinces and gave gifts with royal generosity” (Esther 2:18).

Trouble began when Mordecai didn’t bow down to one of the king’s officials, and when “Haman saw that Mordecai did not bow down or pay homage to him, Haman was filled with fury” (Esther 3:5). Of course Mordecai couldn’t bow down to any man, perhaps due to his Jewish faith. This event was enough to motivate Haman to try to exterminate the Jews; down to the very last one.

Esther 4:13-14 “For if you keep silent at this time, relief and deliverance will rise for the Jews from another place, but you and your father’s house will perish. And who knows whether you have not come to the kingdom for such a time as this?”

When Mordecai found out Haman’s plot to kill all the Jews, he immediately talks to Queen Esther in the hopes that she could have the king interceded on behalf of the Jews. Mordecai seems to think that Esther was on the throne as queen for a purpose in God’s providence, being “for such a time as this.” The Book of Esther never does mention God by name but God is powerfully inferred in it and He is interwoven throughout this book, even if unnamed. 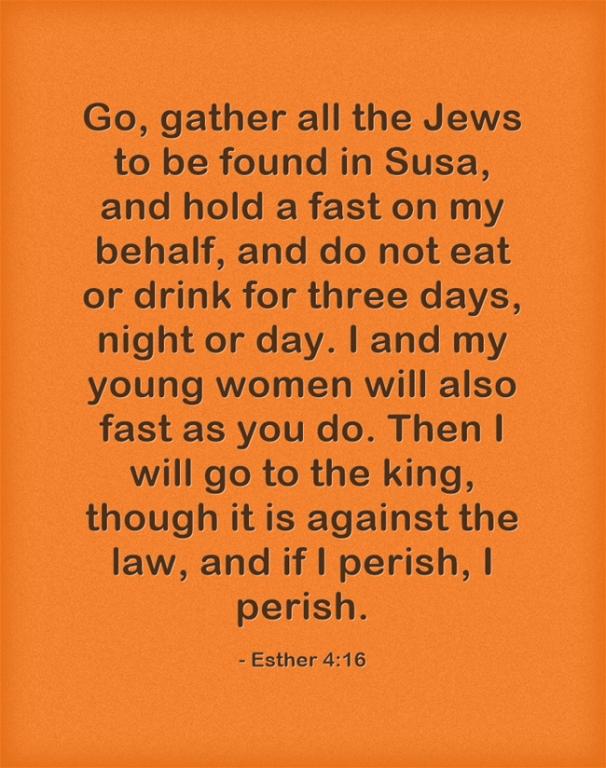 Esther 4:16 “Go, gather all the Jews to be found in Susa, and hold a fast on my behalf, and do not eat or drink for three days, night or day. I and my young women will also fast as you do. Then I will go to the king, though it is against the law, and if I perish, I perish.”

The King had no idea that Esther was Jewish so if the plot to kill all the Jews succeeded, she’d perish too. Esther tells everyone to fast for her and if she perishes, she perishes. At least she can try. This is a three day fast, which in Jewish culture is done only in extreme cases over life threatening circumstances. Even though God’s not mentioned by name in the Book of Esther, fasting fits into the context of petitioning God for help.

Esther 5:2 “And when the king saw Queen Esther standing in the court, she won favor in his sight, and he held out to Esther the golden scepter that was in his hand. Then Esther approached and touched the tip of the scepter.”

Esther took her life into the king’s hand when she approached throne. If the king didn’t extend the scepter, then the person could be hung. It took great courage for Queen Esther to come into the king’s presence, even though she was the queen. We can remember how King Ahasuerus reacted when Queen Vashti rebelled against him. Thankfully, the king did hold out the scepter and Queen Esther could speak with the king.

Esther 7:3 “Then Queen Esther answered, “If I have found favor in your sight, O king, and if it please the king, let my life be granted me for my wish, and my people for my request.”

Here is where Queen Esther asks of the king a favor. She literally pleads for her life and the lives of her people. She had been waiting for the king and the king’s response must have delighted her greatly as he said, “What is your wish, Queen Esther? It shall be granted you. And what is your request? Even to the half of my kingdom, it shall be fulfilled” (Esther 7:2). So Queen Esther was able to intercede on behalf of her people, and in an ironic way, the tables would be turned against those seeking to kill the Jews.

Esther 8:17 “And in every province and in every city, wherever the king’s command and his edict reached, there was gladness and joy among the Jews, a feast and a holiday. And many from the peoples of the country declared themselves Jews, for fear of the Jews had fallen on them.”

In the end, we read that it was “in the twelfth month, which is the month of Adar, on the thirteenth day of the same, when the king’s command and edict were about to be carried out, on the very day when the enemies of the Jews hoped to gain the mastery over them, the reverse occurred: the Jews gained mastery over those who hated them” (Esther 9:1). Yes, it was for such a time and place as this that Queen Esther sat on the throne and was able to save the Jewish nation.

The historical account of Queen Esther went from a slave or servant, to Queen of “India to Ethiopia over 127 provinces” (Esther 1:1). This should serve to remind us that God will often use the least regarded people to do the greatest of things and for the glory of God; even if it’s to save a huge empire full of Jews.

May 20, 2016 Top 7 Bible Verses About Jonah
Recent Comments
1 Comment | Leave a Comment
Browse Our Archives
get the latest from
Evangelical
Sign up for our newsletter
POPULAR AT PATHEOS Evangelical
1