Here are seven Bible verses about King David of Israel.

First Chronicles 10:13-14 “Saul died for his breach of faith. He broke faith with the Lord in that he did not keep the command of the Lord, and also consulted a medium, seeking guidance. He did not seek guidance from the Lord. Therefore the Lord put him to death and turned the kingdom over to David the son of Jesse.”

When King Saul refused to obey God, God was silent to his requests. He went so far as to seek the deceased Samuel’s advice through a medium. How far he has fallen! David, upon hearing the news of King Saul and Jonathan’s death, didn’t celebrate because he would not be King, but “David took hold of his clothes and tore them, and so did all the men who were with him. And they mourned and wept and fasted until evening for Saul and for Jonathan his son and for the people of the Lord and for the house of Israel, because they had fallen by the sword” (2nd Sam 1:11-12). A godly man or woman doesn’t celebrate their enemies defeat. David simply said, “How the mighty have fallen in the midst of the battle” (2nd Sam 1:25), grieving over his close friend Jonathan but also his former enemy, King Saul.

Acts 13:22 “And when he had removed him, he raised up David to be their king, of whom he testified and said, ‘I have found in David the son of Jesse a man after my heart, who will do all my will.’”

The first thing that Paul spoke about when he went into the synagogue in Jerusalem was to tell the Jews that Jesus Christ was obviously the Son of David, as spoken of by David (Psalm 22-24, etc.) and the prophets; the Messiah that they had long been waiting for (Acts 13:32). They must have known that Jesus was related to King David and was of the tribe of Judah. They had seen His miracles and many saw Lazarus raised from the dead. He was also prophesied in much of the Old Testament, but none are as blind as those who refuse to see.

First Chronicles 18:14 “So David reigned over all Israel, and he administered justice and equity to all his people.”

Don’t you pray for that for this and every nation? It is just as Solomon wrote: “When the righteous increase, the people rejoice, but when the wicked rule, the people groan” (Prov 29:2). Elihu, one of Job’s friends, correctly said that God “is over individual and nation alike” (Job 34:29) so “that godless men would not rule Nor be snares of the people” (Job 34:30). Today it seems there is no nation free from corruption, either in financial dealings or through pork-barrel politicians flaying their constituents. More and more we are seeing our freedoms taken away. With King David, it was not so. 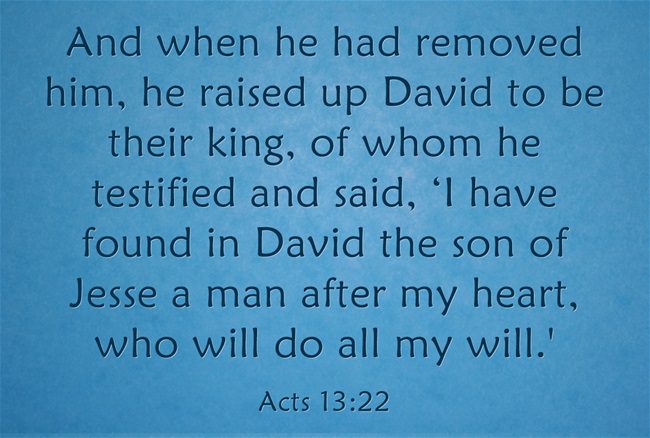 First Chronicles 14:7 “And the fame of David went out into all lands, and the Lord brought the fear of him upon all nations.”

David was Israel’s greatest king as he advanced the nation to its greatest expanse and at the zenith of their power. David, being a man after God’s own heart, doing all according to His Word, resulted in Israel finally finding peace in the land. All of Israel’s enemies were either subject to David or no threat to him or Israel. Today, it seems that Israel is surrounded by enemies who, once again, seek to destroy her. Israel will survive because He has chosen them as His own people, and as He always has, “I have kept for myself seven thousand men who have not bowed the knee to Baal” (Rom 11:4) “So too at the present time there is a remnant, chosen by grace” (Rom 11:5). That is you if you have repented and trusted in Christ.

After the Jewish religious leaders attempted to cause Jesus to stumble several times by asking Him several doctrinal questions, Jesus then asks them a question, as if pointing out that He’s the Son of David and He is the promised Messiah that was to come through the family of David and the Tribe of Judah. He then asks them about David who wrote, “The Lord said to My Lord, ‘Sit at my right hand until I put your enemies under your feet’” (Matt 22:44) as quoting Psalm 110:1. Jesus had answered every questions of theirs, but they were speechless when Jesus asked them only one!

First Chronicles 29:27 “The time that he reigned over Israel was forty years. He reigned seven years in Hebron and thirty-three years in Jerusalem.”

The number forty seems to have strong symbolic language, like where Israel wandered in the wilderness for forty years, Moses was on the mountain of God for forty days and nights, and where Jesus was in the wilderness on a forty day fast and was able to resist three temptations of the Devil. It is a number of testing and trying and King David passed this test because his heart was closely aligned with the heart of God’s (Acts 13:22).

First Chronicles 21:7 “Then he died at a good age, full of days, riches, and honor. And Solomon his son reigned in his place.”

Dying “at a good age” means an age that was lived to the fullest and to an age where it was obvious, that God was with him. A life “full of days” is more likely for those who have a heart for God and desire to live a life that is pleasing to Him. King David had prepared Solomon to take over as king, but it wasn’t long before things began to fall apart around him. As you’ve read, when the righteous rule, the people rejoice, but then it might reach a point where God may allow evil rulers as a form of discipline upon a nation, however, even this is done in love as He is trying to have them turn from their sin and turn toward Him so that He can bless them with “justice and equity to all his people.”

King David was Israel’s greatest king but even he had great sins in his life. The difference was he repented of it and wrote one of the best psalms in the Bible (Psalm 51) where his sacrifice to God was “a broken spirit; a broken and contrite heart you, God, will not despise” (Psalm 51:17) and prayed, “Restore to me the joy of your salvation” (Psalm 51:12). God did just that. 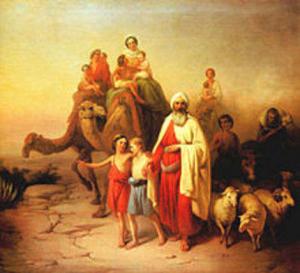