7 Key Bible Verses From The Book of 2 Kings

Here are seven key Bible verses taken from the Book of Second Kings.

Second Kings 1:3 “The angel of the Lord said to Elijah the Tishbite, “Arise, go up to meet the messengers of the king of Samaria, and say to them, ‘Is it because there is no God in Israel that you are going to inquire of Baal-zebub, the god of Ekron?”

Second Kings 2:8 “Then Elijah took his cloak and rolled it up and struck the water, and the water was parted to the one side and to the other, till the two of them could go over on dry ground.”

This would be the last miracle that Elijah would do before passing on the prophetic leadership mantle to Elisha. Just after Elijah cleared the way through the water, “Elijah said to Elisha, “Ask what I shall do for you, before I am taken from you.” And Elisha said, “Please let there be a double portion of your spirit on me. You have asked a hard thing; yet, if you see me as I am being taken from you, it shall be so for you, but if you do not see me, it shall not be so” (2nd Kings 2:9-10). That did happen as Elijah had seven miracles; Elisha would have fourteen.

Second Kings 2:11-12 “And as they still went on and talked, behold, chariots of fire and horses of fire separated the two of them. And Elijah went up by a whirlwind into heaven. And Elisha saw it and he cried, “My father, my father! The chariots of Israel and its horsemen!” And he saw him no more.”

Elisha would have another occasion to witness a chariot of fire, but for now, this must have been the only other man that never tasted death, Enoch being the other one. Why God took Elijah up in a chariot of fire is a mystery. We do read about the account where Jesus took Peter, James, and John up a high mountain and allowed them to witness the Transfiguration, where they got to see the Shekinah glory of God (Matt 17) and there was Elijah again. Elijah was still living, as was Moses, as they were both talking with Jesus. 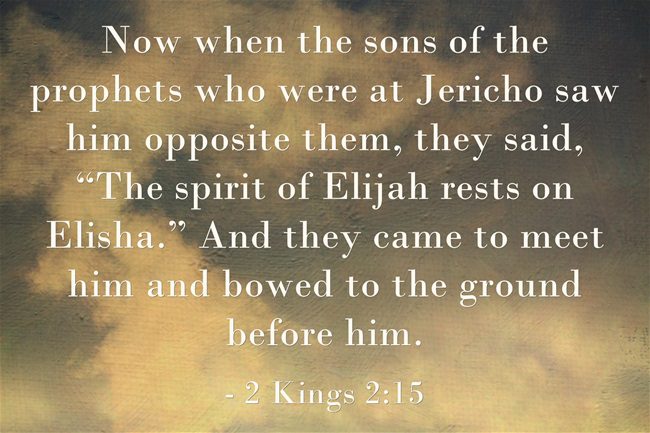 Second Kings 2:15 “Now when the sons of the prophets who were at Jericho saw him opposite them, they said, “The spirit of Elijah rests on Elisha.” And they came to meet him and bowed to the ground before him.”

The sons of the prophets saw Elisha’s miracle, they knew that he had Elijah’s ministry for his own. Just prior to this, Elisha, “took the cloak of Elijah that had fallen from him and struck the water, saying, “Where is the Lord, the God of Elijah?” And when he had struck the water, the water was parted to the one side and to the other, and Elisha went over” (2nd Kings 2:14). This was the last miracle that Elijah had done but the very first miracle that Elisha did, indicating a transition in the prophets of God.

Second Kings 4:32-33 “When Elisha came into the house, he saw the child lying dead on his bed. So he went in and shut the door behind the two of them and prayed to the Lord.”

After being summoned by the Shunammite woman and telling the prophet that her son had died, Elisha went in the room and closed the door and almost immediately, he said, “Call this Shunammite.” So he called her. And when she came to him, he said, “Pick up your son.” She came and fell at his feet, bowing to the ground. Then she picked up her son and went out” (2nd Kings 4:36-37). This is just what Elijah had done and this also prefigured the Son of God Who would do the same, however He would do this more than once during His earthly ministry.

Second Kings 5:14 “So he went down and dipped himself seven times in the Jordan, according to the word of the man of God, and his flesh was restored like the flesh of a little child, and he was clean.”

Naaman was a mighty “commander of the army of the king of Syria, was a great man with his master and in high favor, because by him the Lord had given victory to Syria. He was a mighty man of valor, but he was a leper” (2nd Kings 5:1) so one of the slave girls that was carried off by the Syrians mentioned the Prophet Elisha, who might cure Naaman of his leprosy, so Naaman loaded up great wealth so “Elisha sent a messenger to him, saying, “Go and wash in the Jordan seven times, and your flesh shall be restored, and you shall be clean.” But Naaman was angry and went away, saying, “Behold, I thought that he would surely come out to me and stand and call upon the name of the Lord his God, and wave his hand over the place and cure the leper” (2nd Kings 5:10-11). It was only after one of Naaman’s servants suggested that he at least try, was Naaman cured but he first had to humble himself and do what he was told.

Second Kings 6:17 “Then Elisha prayed and said, “O Lord, please open his eyes that he may see.” So the Lord opened the eyes of the young man, and he saw, and behold, the mountain was full of horses and chariots of fire all around Elisha.”

When Elisha’s servant saw that he and Elisha had been surrounded by “an army with horses and chariots was all around the city…the servant said, “Alas, my master! What shall we do” (2nd Kings 6:15) but Elisha simply said, “Do not be afraid, for those who are with us are more than those who are with them.” Then Elisha prayed and said, “O Lord, please open his eyes that he may see.” So the Lord opened the eyes of the young man, and he saw, and behold, the mountain was full of horses and chariots of fire all around Elisha” (2nd Kings 6:16-17). There is also an invisible enemy who engages in spiritual warfare and is against every believer and who needs to put on the armor of God, every single day (Eph 6:10-18).

I had a difficult time selecting only seven Bible verses or passages from the 2nd Book of Kings because it is so full of historical accounts. It does see that Elijah, in the beginning, and then Elisha dominate much of 1st and 2nd Kings, but that’s the age in which Israel lived at that time. The prophets would have never been needed so much if Israel had not sinned so much. Falling into idolatry, which led to sexual immorality, usually brought warnings for the people and gave them time to repent. That is my desire for this nation before it’s too late.

May 24, 2016 7 Good Bible Verses From The Book of 1 John
Recent Comments
19 Comments | Leave a Comment
Browse Our Archives
get the latest from
Evangelical
Sign up for our newsletter
POPULAR AT PATHEOS Evangelical
1