Here are seven Bible verses about the throne of God.

Isaiah 6:1 “In the year that King Uzziah died I saw the Lord sitting upon a throne, high and lifted up; and the train of his robe filled the temple.”

In Isaiah chapter 6, he receives a vision of the very throne of God and seeing that the train filled the temple, this means that since the length of trains on the kings was usually associated with power, the longer the train, the more power the king had and in this case, the Lord’s train was the longest of any as it filled the entire temple. Isaiah was familiar with kings and so he knew what this meant. He was so overwhelmed, as we’d all be and so he said, “Woe is me! For I am lost; for I am a man of unclean lips, and I dwell in the midst of a people of unclean lips; for my eyes have seen the King, the Lord of hosts” (Isaiah 6:5) and over the throne of God the glorious seraphim said, “Holy, holy, holy is the Lord of hosts; the whole earth is full of his glory” (Isaiah 6:3). There may be no greater chapter on describing the throne of God than Isaiah 6.

Revelation 4:2 “At once I was in the Spirit, and behold, a throne stood in heaven, with one seated on the throne.”

The word “throne” appears 38 times in the Book of Revelation and that’s far more than any other book in the Bible, but when we narrow our search down to the “throne of God,” no other book comes close in the number of mentions than does the Book of Revelation. In Revelation chapter 4 the Apostle John is describing and the One on the throne sounds very much like Jesus Christ as John wrote, “And he who sat there had the appearance of jasper and carnelian, and around the throne was a rainbow that had the appearance of an emerald” (Rev 4:3), and then John sees “Around the throne were twenty-four thrones, and seated on the thrones were twenty-four elders, clothed in white garments, with golden crowns on their heads. From the throne came flashes of lightning, and rumblings and peals of thunder, and before the throne were burning seven torches of fire, which are the seven spirits of God, and before the throne there was as it were a sea of glass, like crystal” (Rev 4:4-6a). The seven spirits are likely the seven churches mentioned elsewhere in the Book of Revelation.

Revelation 3:21 “The one who conquers, I will grant him to sit with me on my throne, as I also conquered and sat down with my Father on his throne.”

Jesus came to make us a kingdom of priests and kings and those who are His own today will serve with Him in eternity (Rev 3:21). That’s why John had earlier written that Christ has made of the redeemed, “a kingdom, priests to his God and Father, to him be glory and dominion forever and ever. Amen” (Rev 1:6). God intended Israel to be a light to the nations around her so that they could glorify God and believe in Him. God said, “you shall be to me a kingdom of priests and a holy nation. These are the words that you shall speak to the people of Israel” (Ex 19:6), but where they failed, the church will succeed, although we know that God’s not finished with the nation Israel. 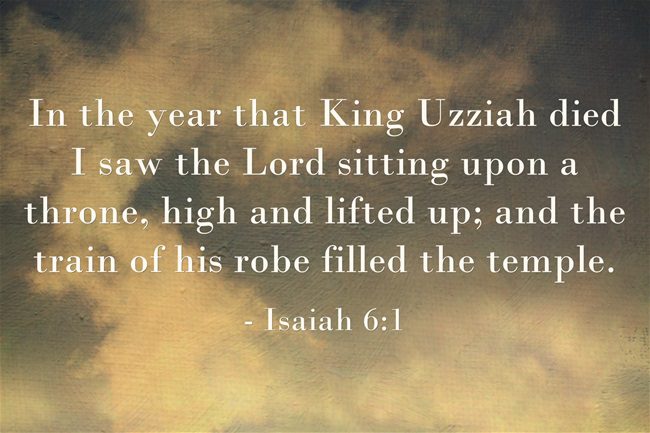 Revelation chapter 4 is about as close to Isaiah’s somewhat comprehensive description of the throne of God. This chapter and Isaiah 6 are very close in content. It’s as if John is seeing the same thing that Isaiah saw but only describes it with different words. They both had three seraphim, they both repeated “Holy, holy, holy, is the Lord God Almighty” (Rev 4:8). What glorious views of the throne of God are Isaiah 6 and Revelation 4.

Second Chronicles 18:18 “And Micaiah said, “Therefore hear the word of the Lord: I saw the Lord sitting on his throne, and all the host of heaven standing on his right hand and on his left.”

When King Ahab of Israel and Jehoshaphat, king of Judah allied with one another to go against Ramoth-gilead (2nd Chron 18:2-3), they sought the advice of their own prophets and wanting to appease the kings, they said that God is for them and they will have a swift victory, but Jehoshaphat was not convinced of these “prophets” of Israel (2nd Chron 18:5) and asked, “Is there not here another prophet of the Lord of whom we may inquire” (2nd Chron 18:6). The one they suggested was not a popular choice because it was Micaiah always said what God told him and not what they wanted to hear. When they said, “Behold, the words of the prophets with one accord are favorable to the king. Let your word be like the word of one of them, and speak favorably” (2nd Chron 18:12), Micaiah rebuked them, saying, “As the Lord lives, what my God says, that I will speak” (2nd Chron 18:13). That’s when Micaiah saw the Lord on His throne, indicating only he had access to God.

Psalm 11:4 “The Lord is in his holy temple; the Lord’s throne is in heaven; his eyes see, his eyelids test the children of man.”

David wrote a lot about the temple of God and where His throne is in the Holy of Holies. The Lord is in His holy temple and that throne is in heaven but David’s focused on the eternality of that throne. In Psalm 9:7 he wrote, “But the Lord sits enthroned forever; he has established his throne for justice” and “Your throne, O God, is forever and ever. The scepter of your kingdom is a scepter of uprightness” (Psalm 45:6) and so this everlasting throne, “God reigns over the nations; God sits on his holy throne” (Psalm 47:8).

Hebrews 8:1 “Now the point in what we are saying is this: we have such a high priest, one who is seated at the right hand of the throne of the Majesty in heaven.”

The Book of Hebrews, written to Jewish Christians, focused on the priesthood and how Jesus is the Supreme High Priest Who only had to enter once into the Holy of Holies, and did so with His own blood. The Jews would have been well acquainted with the Mosaic Law and the sacrificial rituals so they were told that these were only a shadow of things to come and did come in Christ. The others were a shadow; Jesus is the reality. Those previous rituals pointed toward Christ so that we can see that “Christ has obtained a ministry that is as much more excellent than the old as the covenant he mediates is better, since it is enacted on better promises” (Heb 8:6).

Like the two kings of Israel who sought only what they want to hear, Micaiah spoke the true words of God, regardless of whether they liked it or not, and so did the author of Hebrews who wrote a serious warning; “Strive for peace with everyone, and for the holiness without which no one will see the Lord” (Heb 12:14). That means you’ll never see the glory of God on His majestic throne unless you believe (John 3:36a). If not, you have the wrath of God abiding on you right now (John 3:36b) and “unless you repent, you will all likewise perish” (Luke 13:3).