Who Was Baal? A Bible Study

Who was Baal? Why is it still important to know today?

The word “baal” simply means “lord” or “owner,” but in the ancient world, Baal was a Canaanite god, but “baal” can be a noun and can refer to many such gods, e.g., “Baal-meon” means, “lord of habitation” and Baal-hamon” which means “lord of abundance,” or it can be a specific god, as in Baal, which would be a proper noun. If there was one god above all the ancient gods of this time period, it was Baal who was the half-bull, half-man god of fertility. Baal is the god that is most often referred to in the Bible. Baal apparently had many powers. For one, Baal was considered to be a weather god and controlled the seasons and the rainfall amount. The thunderstorm was seen as Baal’s self-revelation to the ancient Canaanites and lightning was his weapon of choice to intervene when he saw fit to do so. Since rain was vital to the Canaanites, they saw Baal as a fertility god, but that wasn’t restricted to agriculture purposes (as we shall later read). At Ras-Shamar, Baal was referred to as the son of Dagon, the Philistines chief god. The Bible tells us that there were dire consequences for Israel worshiping a false god (Judges 2). Today, that might be a job, car, status, possessions, money, and such things that can “do” things for us. It’s still idolatry and we’ve all been guilty of it, but the point is that Baal is no god at all. Any nation that worshiped a false god has been or will eventually be judged by God, but as we will read, Baal worship was one of the most sinful of all manmade religions.

What’s the difference between Baal (as a proper noun) and simply, “baal?”

The cult of Baal was widespread in the ancient Semitic nation of Israel due to the surrounding nation’s influences. Baal was the pagan god of choice because Baal controlled (supposedly) so much of what was vital for the people to survive that he was worshiped more than any other, however, when you discover their religious practices, you can see why they are condemned so strongly in Scripture. The worshippers would gather around a statue or figure of Baal (a half-bull, half man god), but apparently, to get Baal’s undivided attention, they would sacrifice live infants into the burning hands of Baal with fire in his belly. When his hands would reach a white-hot temperature, the infant would be placed into Baal’s white-hot hands. While the infant was being burned alive, the worshippers were engaging in sexual intercourse with multiple partners (orgies) in the hopes of enticing Baal to bring life-giving rains for their crops, gardens, and orchards. Of course, these practices caused many unwanted pregnancies, but then they solved that problem by making these unwanted babies, babies that conceived during their “religious services,” part of the following Baal worship where these infants would also be burned alive. How evil can it get!? Today, none worship that way (that we know of), but we are still sacrificing unwanted babies and placing them onto the altar of convenience. Is no price too high to pay, just so we can preserve a lifestyle (often, one of sexual immorality)?

Why would Israel choose Baal over God?

What was it about Baal that the Israelites were drawn too? 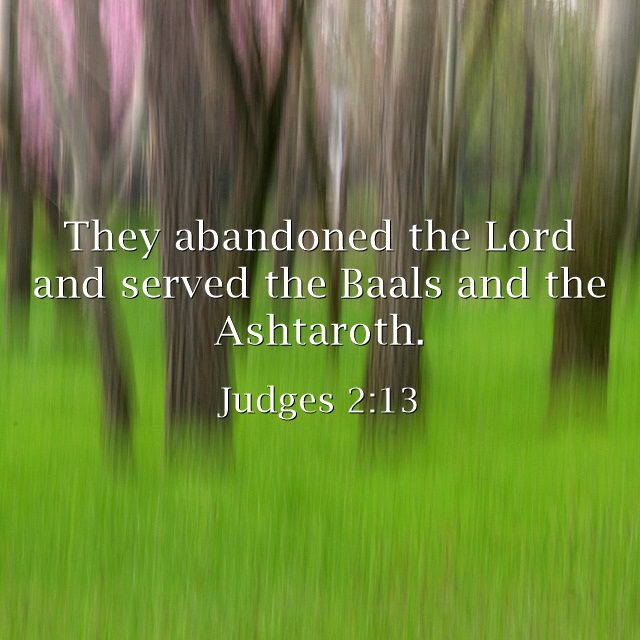 Idolatry isn’t restricted to carved images or stone figures but can be anything that places itself before the One, True God. That idol can be our spouse, our children, our money, our job, our status, our possessions, our pleasures and passions, and even what we think about ourselves can become an idol. Our views can be distorted by sin and the lust and coveting of possessions and people can make us think more highly of ourselves than we should. The Apostle Paul shows that money can become a stumbling block. In fact, “the love of money is a root of all kinds of evils. It is through this craving that some have wandered away from the faith and pierced themselves with many pangs” (1st Tim 6:10). Money’s not evil; it’s the love of money that is at the root of all sorts of evil, and that evil does its work on the owner. We can own many possessions, but there’s always the danger that they come to own us. How easy it is to become a slave to the buck. Whatever idol we have can drive a wedge between us and God and idolatry goes way back thousands of years, like when “the people of Israel did what was evil in the sight of the Lord and served the Baals” (Judges 2:11). The result was, “They abandoned the Lord and served the Baals and the Ashtaroth” (Judges 2:13). Since they had forsaken God, He had forsaken them.

How can money change a person?

Do you know someone who’s prosperous?

Almost immediately after Joshua died, which was right after he had warned them about idolatry, “the people of Israel did what was evil in the sight of the Lord and served the Baals. And they abandoned the Lord, the God of their fathers, who had brought them out of the land of Egypt. They went after other gods, from among the gods of the peoples who were around them, and bowed down to them. And they provoked the Lord to anger” (Judges 2:11-12). Because of Israel’s rebellion, “the anger of the Lord was kindled against Israel, and he gave them over to plunderers, who plundered them. And he sold them into the hand of their surrounding enemies, so that they could no longer withstand their enemies” (Judges 2:14). Israel had a long history of repeating the same cycle, over and over. For example, “the Lord raised up judges, who saved them out of the hand of those who plundered them. Yet they did not listen to their judges, for they whored after other gods and bowed down to them. They soon turned aside from the way in which their fathers had walked, who had obeyed the commandments of the Lord, and they did not do so” (Judges 2:16-17).

Why didn’t Israel ever learn a lesson from their history?

Was God’s judging the nation of Israel in their own best interests?

When Israel entered the period of kings, a similar patter would occur. There would be a falling away from worshiping God is truth and in spirit, then there would be a mixing of truth and error, and finally, it would result in open and blatant idolatry. This would bring God’s judgment which usually resulted in their being taken into captivity. Sometimes Jerusalem would even be destroyed. Whatever the case, God used this to humble His people, bring them to repentance, and confess their sins, and only then would God restore them to their land. When Israel split into the Northern Kingdom (called Israel) and the Southern Kingdom (Judah), they were weakened as a nation. The Northern Kingdom fell into pagan idolatry and they were unable to defend themselves. As a result, they were taken into captive by the Assyrians but they never returned to their land. They were lost (for a time). Sadly, Judah didn’t learn from Israel’s sins, and the Jews were also taken into captivity. Today, they are in the land again. God’s not finished with His chosen people. Many will yet have the chance to know Christ as the fulfillment of the Messiah, but more importantly, He will be there Savior. I see nothing in Scripture that says that God would not do the same thing again to any nation that rebels against Him and worships another god (money, etc.).

What are some of the consequences of having an idol?

What is it that comes closest in your life to being an idol?

I see nothing in Scripture that says that God will not do to other nations that He did to His own people, the nation of Israel. Since God is no respecter of persons or nations, He will judge the idolatry in any person and in any nation. You don’t have to bow down to an image to be committing idolatry. Jesus said that the two greatest commandments are, “You shall love the Lord your God with all your heart and with all your soul and with all your mind. This is the great and first commandment. And a second is like it: You shall love your neighbor as yourself. On these two commandments depend all the Law and the Prophets” (Matt 22:37-40). When we begin to love family, friends, job, money, position, home or car, and even ourselves more than God, then that is idolatry. We are told to worship God in spirit and in truth (John 4:24). Without the truth, we’ll be led into error; without the Spirit, we won’t recognize the truth when we see it.