Has Every President Used The Bible To Take The Oath Of Office?

Does history record whether every U.S. President placed his hand on the Bible when taking the oath of office?

The Bible teaches that we are not to swear by anything or anyone when we make a promise. James wrote “do not swear, either by heaven or by earth or by any other oath, but let your “yes” be yes and your “no” be no, so that you may not fall under condemnation” (James 5:12). Jesus said, “Do not take an oath at all, either by heaven, for it is the throne of God, or by the earth, for it is his footstool, or by Jerusalem, for it is the city of the great King. And do not take an oath by your head, for you cannot make one hair white or black” (Matt 5:34-36), so we don’t really need to swear when we say we are going to do something or make a promise. Jesus tells us to “Let what you say be simply ‘Yes’ or ‘No’; anything more than this comes from evil” (Matt 5:37). 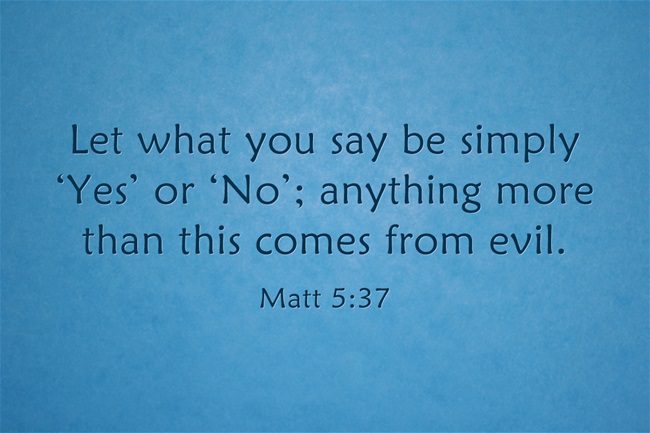 Swearing on the Bible

Traditionally, presidents who were sworn into office would raise their right hand and place their left hand on the Bible. The right hand typically represents authority, so this might be why the right hand is raised. The vast majority of the U.S. Presidents placed their hand on the Bible when being sworn in, including George Washington, but some presidents, like Theodore Roosevelt didn’t use the Bible. Neither did John Quincy Adams and Franklin Pierce; instead they placed their left hand on a law book, with the insinuation that they were swearing an oath to the U.S. Constitution. Recently, President Barrack Obama took the presidential oath of office on two different Bibles and used the same Bible that Abraham Lincoln used in his inauguration but also Martin Luther King Jr.’s Bible, however not every president swears by the Bible or uses it during their inauguration.

Not every president placed their left hand on the Bible but they all took an oath, according to Article II, Section One, and in Clause 8 of the United States Constitution, so whether they placed their hand on the Bible or not, they were obligated to uphold the U.S. Constitution and execute the office of the presidency lawfully. Theodore Roosevelt didn’t use a Bible and neither did several others, but the vast majority who took the oath of the presidency did place their hand on the Bible and swore or affirmed to uphold their prescribed duties. It doesn’t really matter whether they placed their hand on the Bible or not because that doesn’t make something true. It can’t help the president keep his promise to fulfill his oath. That’s a matter of the human heart. Presidents are subject to the people, and ultimately, they are subject to God, for God directs nations for His purposes. Even a pagan king is under God’s sovereignty, whether he knows it or not, because the Bible says, “The king’s heart is a stream of water in the hand of the Lord; he turns it wherever he will” (Prov 21:1). So even though “Every way of a man is right in his own eyes…the Lord weighs the heart” (Prov 21:2), and God desires that we “do righteousness and justice [which] is more acceptable to the Lord than sacrifice” (Prov 21:3).

Not every president has placed their hand on the Bible but they are still under oath to execute the office of the presidency faithfully and that they are to do the best that they can in order to preserve, protect, and defend the Constitution of the United States, so whether they have placed their hand on the Bible or not, they are still accountable to the people, but ultimately to God, so even if we don’t like the current president, we are told to “never avenge yourselves, but leave it to the wrath of God, for it is written, “Vengeance is mine, I will repay, says the Lord” (Rom 12:19) because “each of us will give an account of himself to God” (Rom 14:12). The president of the United States is no exception, “For we must all appear before the judgment seat of Christ, so that each one may receive what is due for what he has done in the body, whether good or evil” (2nd Cor 5:10).

August 29, 2016 Should The United States President Still Be Sworn In Using A Bible?
Recent Comments
0 | Leave a Comment
Browse Our Archives
Related posts from Christian Crier