Should The United States President Still Be Sworn In Using A Bible?

Should The United States President Still Be Sworn In Using A Bible? August 29, 2016 Jack Wellman

Do you think the United States president should still be sworn in on a Bible?

Should United States presidents who have been elected be sworn in on the Bible? Most presidents in the past have done so, but that doesn’t mean that they all should. For one thing, the Bible commands us to not swear by anything or anyone under heaven or on earth, because we can’t make something happen just by making an oath or by swearing that something is true or not or that we’ll do something. Jesus said, “you have heard that it was said to those of old, ‘You shall not swear falsely, but shall perform to the Lord what you have sworn.’ But I say to you, Do not take an oath at all, either by heaven, for it is the throne of God, or by the earth, for it is his footstool, or by Jerusalem, for it is the city of the great King” (Matt 5:33-35). Jesus’ point is that we shouldn’t swear by anything or anyone at all or make a promise we might not be able to keep, and even if we say we’ll keep our word, something could happen that doesn’t allow us to keep our promise and we end up swearing to God that we’ll do something and may end up not being able to keep that promise at all. It would be better to affirm that you will do such and such a thing or things, rather than swear that you will.

James, Jesus’ half-brother, once wrote “But above all, my brothers, do not swear, either by heaven or by earth or by any other oath, but let your “yes” be yes and your “no” be no, so that you may not fall under condemnation” (James 5:12). By James saying, “above all” he is saying that this is critically important. James wrote this in the context of Job’s suffering where he wrote, “as an example of suffering and patience, brothers, take the prophets who spoke in the name of the Lord. Behold, we consider those blessed who remained steadfast. You have heard of the steadfastness of Job, and you have seen the purpose of the Lord, how the Lord is compassionate and merciful” (James 5:10-11). James’ point is that we should just tell people yes or no, and not add anything to our words in order to make our word or promise sound surer. We can’t make anything happen just be swearing an oath or making a promise. We must simply respond with a yes or a no because anything more than this, as James puts it, places us at risk of falling under God’s condemnation. Not a condemnation to hell but not having God’s blessings. If we say we’re going to do something, perhaps we should qualify it by saying, “If I possible can…I will,” instead of, “I swear to God” or “I vow under oath before God that I will do such and such.” It is best to just let it be yes or let it be no. Anything more than this is wrong. 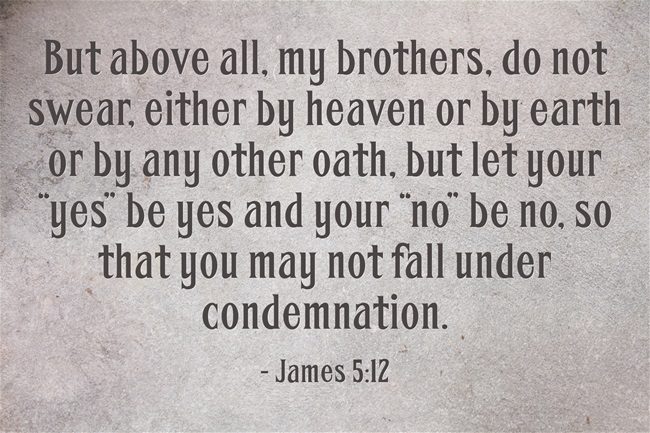 Should presidents be made to place their hand on the Bible and swear by it? I don’t believe we should make it compulsory because we are commanded to not make oaths, not swear by anything, and to not make promises we can’t keep, so swearing an oath on the Bible could bring God’s judgment on those who do and then break their own vows and to require a president to do so, could put them at risk for God’s judgment if they break that oath. Besides, the Bible flatly states that we should not swear, make an oath, or a vow that we might not be able to keep. The Oath of the Office of the President of the United States is: “I, [fill in the name] do solemnly swear (or affirm) that I will support and defend the Constitution of the United States against all enemies, foreign and domestic; that I will bear true faith and allegiance to the same; that I take this obligation freely, without any mental reservation or purpose of evasion; and that I will well and faithfully discharge the duties of the office on which I am about to enter. So help me God.” If a president swears to support and defend the Constitution, and faithfully discharge their duties of this office, and then pledge, “So help me God,” there is a very good chance that this oath will be broken. It doesn’t make the president more likely to do his or her duty…it only placed them under their own oath that they may or may not be able to keep. They might even purposefully choose not to keep the promise or oath.

Vows are similar to swearing an oath or taking a vow. Jesus said, “And do not take an oath by your head, for you cannot make one hair white or black. Let what you say be simply ‘Yes’ or ‘No’; anything more than this comes from evil” (Matt 5:36-37) because “he (or she) who swears by heaven swears by God’s throne and by the One who sits on it” (Matt 5:34). King Solomon knew that “It is better that you should not vow than that you should vow and not pay” (Eccl 5:5) because “If you make a vow to the LORD your God, you shall not delay fulfilling it, for the LORD your God will surely require it of you, and you will be guilty of sin” (Deut 32:21). Since the Bible teaches we shouldn’t swear, why should we require our newly elected or re-elected presidents do so?

August 29, 2016
Has Every President Used The Bible To Take The Oath Of Office?
Next Post