What Does The Bible Say About Lost Souls?

Does the Bible mention “lost souls?” If so, what does it say about them?

The old hymn, “Amazing Grace” mentions that we were all once lost but now we’re found. Sometimes we get this reversed by saying, “I found God,” but my question is, “Was God missing?” No, none of us really seek after God. The Apostle Paul reminds us, by quoting Old Testament verses (Psalm 41:1, 53:1, 143:2), that “None is righteous, no, not one; no one understands; no one seeks for God” (Rom3:10-11). Are there any that really do good? No, in fact, “All have turned aside; together they have become worthless; no one does good, not even one” (Rom 3:12), so that narrows it down to zero who seek after God, and the number of those that are good is zero. They might think they’re a good person in their own eyes, but the Bible declares that only God is good, but even though none of us are good, we are saved by a very good God Who provided the sinless Son of God to die for wretches like me. This proves that Christians are not saved because they are good…but only because God is good. And, Christians are in no way superior to unbelievers. We have no biblical claim to say such a thing. In fact, every one of us who have trusted in Christ were at one time as good as dead men walking (Eph 2:1).

Jesus once said that “the Son of Man came to seek and to save the lost” (Luke 19:10), so it is God Who does the seeking and the saving. The lost might think they come to God to be saved, but Jesus is the Good Shepherd Who goes out to seek the lost sheep so that they might be joined to the fold. Sheep are not smart enough to find the Shepherd on their own, so the Shepherd must take the initiative. Jesus has many sheep in His fold, but if there is one missing, He leaves the rest to seek out the one that is lost. Sometimes God will use His sheep as a means to reach others, but not by beating them over the head with biblical judgments. That’s God place to say, not ours. In Matthew 18:12 Christ asks, “What do you think? If a man has a hundred sheep, and one of them has gone astray, does he not leave the ninety-nine on the mountains and go in search of the one that went astray?” When He finally finds the lost sheep, “he rejoices over it more than over the ninety-nine that never went astray” (Matt 18:13), so it is clearly, as Jesus says, “not the will of my Father who is in heaven that one of these little ones should perish” (Matt 18:14). If the Good Shepherd is willing to go after only one, should show we, but the best apologetic is to respond in love, do not avenge yourself in word, and leave judgment up to God (Rom 12:14-21). Those among Jesus’ flock must remember we’re told to love enemies and ask God to bless those who persecute us (Matt 5:10-12), not try to get even. Jesus said they will know that we’re His disciples by our love; not by our judgments, condemnations, and disrespect. In fact, Jesus said that it is “By this all people will know that you are my disciples, if you have love for one another” (John 13:35). When Christians are less than loving to one another in their words or comments, then how will they know we’re really His disciples? The truth is, they may not! The Apostle Peter said we should always everyone “with gentleness and respect” (1st Pet 3:15), if you can’t do that, say “Thank you.” 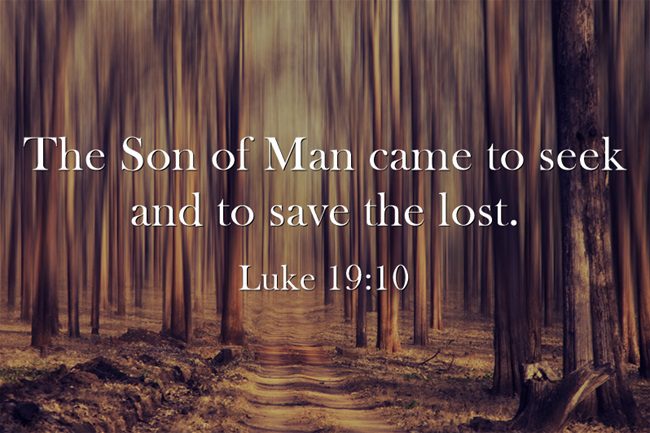 When Nicodemus came to Jesus at night, Christ told him that you must be born again or you cannot enter the kingdom or even see it (John 3:3-7). The Greek word used for “born again” means “from above,” meaning that God initiates our new birth. Nobody ever had a saw when they were born? Neither did we have a choice about being born in the first place? We didn’t get to vote on that. This is all a work of God. There was an election before you even existed, and God was the only one that could vote, and the vote was: 1 – 0, in favor of God! Polls closed (Eph 1). Jesus says that “No one can come to me unless the Father who sent me draws him. And I will raise him up on the last day” (John 6:44). This means that God receives all the glory and not ourselves. Like sheep, we’re not capable of saving ourselves. Ezekiel reminds us who does the seeking and saving, as he wrote, “As a shepherd seeks out his flock when he is among his sheep that have been scattered, so will I seek out my sheep, and I will rescue them from all places where they have been scattered on a day of clouds and thick darkness. And I will bring them out from the peoples and gather them from the countries, and will bring them into their own land. And I will feed them on the mountains of Israel, by the ravines, and in all the inhabited places of the country” (34:12-13). It is God Who says, “I myself will be the shepherd of my sheep, and I myself will make them lie down, declares the Lord God. I will seek the lost, and I will bring back the strayed, and I will bind up the injured, and I will strengthen the weak, and the fat and the strong I will destroy. I will feed them in justice” (15-16). There is no mention here that God needs our help. We need His.

Now that we know who the lost are, we can finally ask, “Who is saved?” It is they who God brings to repentance (Rom 2:4; 2nd Tim 2:25), and then those same will put their trust in Christ. Jesus Christ is not just one of many ways to be saved…He is the One and only way to be saved (Acts 4:12). I am thankful that there is at least “a” way! If God is calling someone, He will send His Spirit to convict them of their sins and the will know it. I can’t talk them into conviction because they may talk their way out of it. It takes the Spirit of God to make them see their own need to be rescued from the coming wrath of God (Rom 2:5-10) for rejecting Jesus Christ (John 3:36). When God brings them to repentance and faith, He assures them that, “All that the Father gives me will come to me, and whoever comes to me I will never cast out” (John 6:37), and “that I should lose nothing of all that he has given me, but raise it up on the last day” (John 6:39), so “everyone who looks on the Son and believes in him should have eternal life, and I will raise him up on the last day” (John 6:40). How secure are these sheep? Jesus reminds them (and us) “I give them eternal life, and they will never perish, and no one will snatch them out of my hand. My Father, who has given them to me, is greater than all, and no one is able to snatch them out of the Father’s hand” (John 10:28-29). Jesus gives them eternal life, period. All we can do is throw ourselves before God and plead for His mercy. No amount of good works is going to help us; rather “it is by grace you have been saved through faith. And this is not your own doing; it is the gift of God, not a result of works, so that no one may boast” (Eph 2:8-9), so there is no boasting allowed…except that we boast in the goodness of God and His great mercy.

I pray this will motivate you to seek out the lost so that God might use you as a means to save some, since it is God that saves and adds to His church (Acts 2:47), and not we. Sheep are not smart enough to find good pasture or have the sense to lie down in green pastures, but they may attract sheep not yet of this fold. It is up to the Good Shepherd to seek out those who are lost so that they might be saved. It’s not a matter of the human will (John 1:13) or being good (Eph 2:8), but it’s all about the will of God and the fact that He is good. Let Him have His way with us as we gently seek out the lost, motivated by love.