Proverbs 17:28 “Even a fool who keeps silent is considered wise; when he closes his lips, he is deemed intelligent.”

The psalmist wrote, “we will not fear though the earth gives way, though the mountains be moved into the heart of the sea, though its waters roar and foam, though the mountains tremble at its swelling” (Psalm 46:2-3), and even if “The nations rage, the kingdoms totter; he utters his voice, the earth melts” (Psalm 46:6). All we need do is to rest in the fact that God is over all things and so we can be still and simply know that He is God, and He “will be exalted among the nations” and “in the earth.” Nothing can prevent that.

Lamentations 3:26 “It is good that one should wait quietly for the salvation of the Lord.”

Jeremiah’s wise words in Lamentations 3:26 are shown elsewhere in Scripture to be true. Isaiah the Prophet wrote, “but they who wait for the LORD shall renew their strength; they shall mount up with wings like eagles; they shall run and not be weary; they shall walk and not faint” (40:31). By waiting upon the Lord, you’re also waiting for His divine timing. 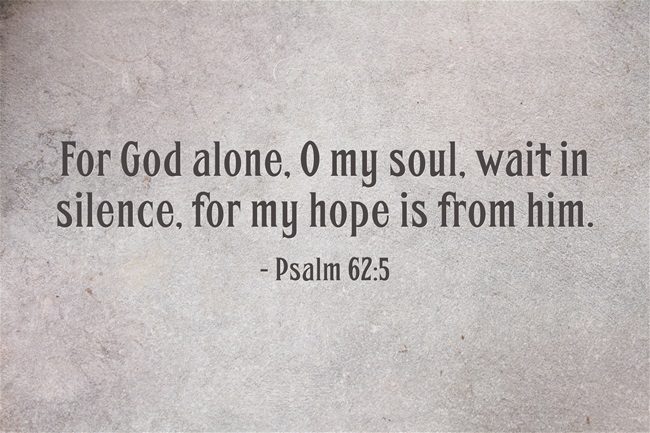 David was in dire straits when he wrote psalm 62. His life was in danger due to his son Absalom’s taking over the throne of Israel. David had to escape but harder still, he had to deal with those who had betrayed him as he wrote they “plan to thrust him down from his high position. They take pleasure in falsehood. They bless with their mouths, but inwardly they curse” (Psalm 62:4), but David didn’t panic as he wrote, “He only is my rock and my salvation, my fortress; I shall not be shaken” (Psalm 62:6).

Perhaps the psalmist is asking God for a little help in keeping his peace in waiting upon the Lord. He needs to have help in his silence and to keep his hand over his mouth from saying something that he might later regret, or even saying something out of frustration. This is why he prays “Do not let my heart incline to any evil, to busy myself with wicked deeds” (Psalm 141:4).

Proverbs 17:27 “Whoever restrains his words has knowledge, and he who has a cool spirit is a man of understanding.”

I think what Solomon is saying is that if we restrain our words, we have wisdom enough to know when to keep our mouths shut, because with many words comes the chance for saying the wrong thing. Sometimes is just better to say nothing at all, and in the context of this verse, the one “who has a cool spirit” might be a person who knows how to hold their tongue and temper when angered, even when they don’t feel like it.

This verse is clearly speaking about Jesus during the Passion and when answering all of the false charges brought up against Him. When Jesus didn’t defend Himself and kept silent before the charges when brought to Pontius Pilate, Pilate was amazed and said to Jesus, “You will not speak to me? Do you not know that I have authority to release you and authority to crucify you” (John 19:10), but Jesus said, “You would have no authority over me at all unless it had been given you from above” (John 19:11), meaning it was all part of the sovereign plan of God.

I could have also included Habakkuk who wrote, “But the Lord is in his holy temple; let all the earth keep silence before him” (Hab 2:20) which is a show of holy reverential respect for God, or Revelation 8:1 where the Apostle John wrote, “And when he had opened the seventh seal, there was silence in heaven about the space of half an hour” (Rev 8:1), perhaps due to what cataclysmic events were about to shortly take place, but most of these verses deal with how we should trust in God and wait upon Him and to “be still” and know He is God.