Does The Bible Teach God Will Not Give Us More Than We Can Handle?

Does The Bible Teach God Will Not Give Us More Than We Can Handle? January 5, 2017 Jack Wellman

Is it true that God will never give us more than we can handle? What verse is that?

The Bible uses the word tests, temptations, and trials almost interchangeable because the same word used for tests, temptations, and trials comes in the Greek word “peirasmos” and means “an experiment, a trial,” or “proving” so God doesn’t send tests or trials to break us but to strengthen our faith but to also show us how weak or strong it is. God isn’t trying to find out something about our faith; He already knows all that there is to know about us. He is interested in our proving to ourselves the depth or shallowness of our faith. The Apostle Peter wrote, “Beloved, do not be surprised at the fiery trial when it comes upon you to test you, as though something strange were happening to you” (1st Pet 4:12). Peter’s point is that we shouldn’t be surprised when tests come because this is part of the Christian faith. If we have a faith that’s never been tested, we have a faith that cannot be trusted.

Many Christians have often wondered why they are going through a trial or a test, but the Bible teaches us that God does not allow anything to enter our life that isn’t good for us, even using the evil done against us for our own good (Gen 50:20). We’ve already read where Peter says that the testing of our faith shouldn’t surprise us. It is in fact to be expected, just as Jesus’ step-brother James wrote, “Count it all joy, my brothers, when you meet trials of various kinds, for you know that the testing of your faith produces steadfastness. And let steadfastness have its full effect, that you may be perfect and complete, lacking in nothing” (James 1:2-4). His point is that trials or tests produce a steadfast faith, a steadfast faith when brought to its fullness, makes us complete or perfect so that we will lack nothing at all. The word “perfect” doesn’t mean perfection but maturity or completion. The faith that’s tested is a faith that’s stronger and produces a steadfast faith that brings us into maturity. Perhaps part of the maturity is that we will know that “the Lord knows how to rescue the godly from trials, and to keep the unrighteous under punishment until the day of judgment” (1st Pet 2:9), even “though now for a little while, if necessary, you have been grieved by various trials” (1st Pet 1:6). If we understand that trials are intended to help us, we can “Count it all joy.” 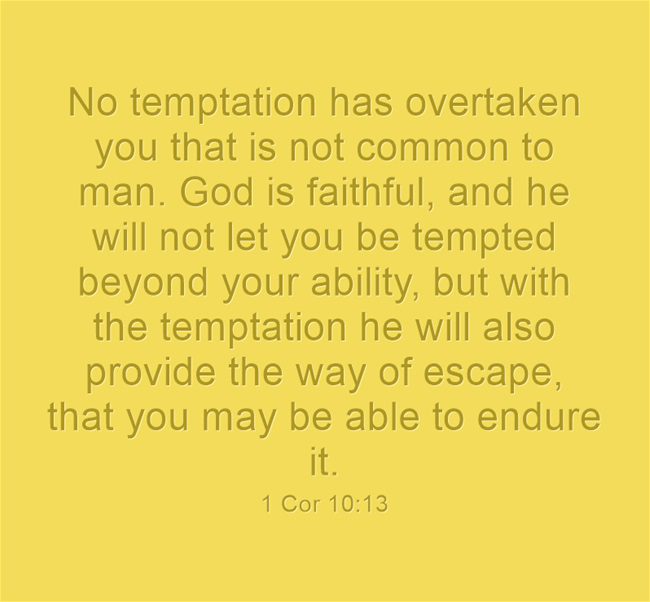 More than we can Handle?

Jesus promised us some amazing things, but He also promised that the way to the kingdom won’t be easy. He said, “In the world you will have tribulation. But take heart; I have overcome the world” (John 16:33), but we are still told to pray to be delivered from the Evil One whose temptations are responsible for much of the world’s suffering (Matt 6:13). Even the spiritual giant, the Apostle Paul, admitted, “We were under great pressure, far beyond our ability to endure, so that we despaired of life itself. Indeed, we felt we had received the sentence of death” but “This happened that we might not rely on ourselves but on God” (2nd Cor 1:8-9), so the tribulations and trials made Paul and his missionary party rely more on God so that’s one of the reasons God allows tests, trials, and tribulation to hit us. Of course, this doesn’t make it easy to endure trials. When the Apostle Paul was leaving the Ephesus church and being present with the elders, he said, “You yourselves know how I lived among you the whole time from the first day that I set foot in Asia, serving the Lord with all humility and with tears and with trials that happened to me through the plots of the Jews” (Acts 20:18-19).

Jesus promised some amazing things to us, but He also told us to “Strive to enter through the narrow door. For many, I tell you, will seek to enter and will not be able” (Luke 13:24) and to “Enter by the narrow gate. For the gate is wide and the way is easy that leads to destruction, and those who enter by it are many” (Matt 7:13), so we should expect trials, tests, and temptations because these make us rely more on God than on ourselves, so if it seems you are overwhelmed by trials, tests, and temptations, remember that “God is faithful; he will not let you be tempted beyond what you can bear. But when you are tempted, he will also provide a way out so that you can endure it” (1st Cor 10:13).