When Do Believer’s Reach Sainthood?

Does a believer have to die and wait so many years to be declared a saint?

What is a Saint?

The Roman Catholic Church doesn’t declare every one of its followers as saints. Sainthood is usually reserved for a precious few, and those only by the Vatican, but can the Vatican really declare who is and who isn’t a saint? What does the Bible say about who is and who isn’t a saint? Does someone have to be known publically for their charitable work or work on earth for the Lord and then die and wait several more years in the hopes the Vatican will approve their sainthood? The word saint comes from the Old French word “seinte” which means, “a saint; a holy relic,” which was the altered Old English word “sanct,” both of which come from the Latin word “sanctus,” meaning “holy, consecrated.” This was an adjective prefixed to the name of a canonized person and by 1300 and it came to be regarded as a noun, meaning, “a person of extraordinary holiness,” but is this the biblical definition or a manmade one? Isn’t every believer a saint according to the Bible, and isn’t the Bible the ultimate source for making this determination? 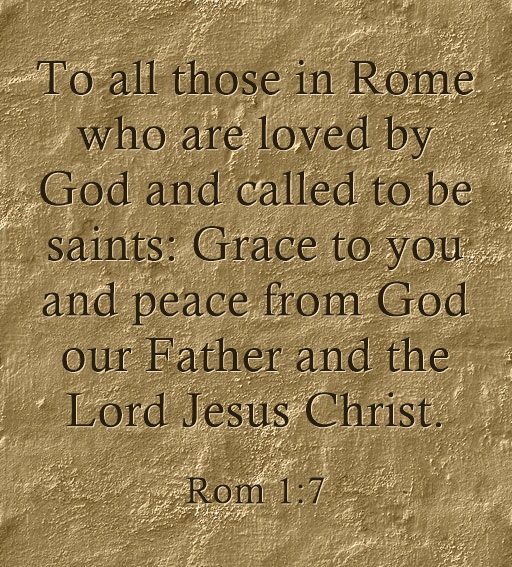 In the New Testament, the Greek word used for saint is “hagios” which means, “saint, most holy thing,” but where did this holiness come from? It wasn’t from them but from God Himself as the Apostle Paul wrote that it was “For our sake he made him to be sin who knew no sin, so that in him we might become the righteousness of God” (2nd Cor 5:21). The person that is a saint, according to the Bible and not human tradition, is a person being declared righteous before God. That person who trusts in Christ has that declaration and as far as God is concerned (and that’s all that really matters), you are a saint if you have repented and trusted in Christ. To these saints, many of the apostles wrote to them as if they were presently saints or in the present tense and not the future tense. One of many examples is when “Peter went here and there among them all, he came down also to the saints who lived at Lydda” (Acts 9:32) and when Ananias was told to go to Saul, said “Lord, I have heard from many about this man, how much evil he has done to your saints at Jerusalem” (Acts 9:13). Obviously, God refers to His own children as saints in the present indicative and just as Paul typically opens his letters by writing “To the church of God that is in Corinth, to those sanctified in Christ Jesus, called to be saints together with all those who in every place call upon the name of our Lord Jesus Christ, both their Lord and ours” (1st Cor 1:2).

Who is a Saint?

The Apostle Paul already mentioned that those who are “sanctified in Christ Jesus” are already “called to be saints” as well as “those who in every place call upon the name of the Lord Jesus Christ” (1st Cor 1:2), and writing elsewhere, “Or do you not know that the saints will judge the world? And if the world is to be judged by you, are you incompetent to try trivial cases” (1st Cor 6:2)? Paul isn’t speaking of the saints who have passed into glory but those who were living at the time. In true and godly humility, Paull said “To me, though I am the very least of all the saints, this grace was given, to preach to the Gentiles the unsearchable riches of Christ” (Eph 3:8), so if you have trusted in Christ, “then you are no longer strangers and aliens, but you are fellow citizens with the saints and members of the household of God” (Eph 2:19).

You don’t have to wait for any manmade declaration to declare you a saint because what God declares to be true is always true, regardless of whatever human tradition dictates. God alone is the One Who declares us saints…we do not declare ourselves as such…it is only through faith in Christ that we become the saints of God. When you get down to the bottom line, there are only two groups of people on the planet; saints and aint’s. You are either saved and have the wrath of God removed from you or you have the wrath of God still abiding on you by your rejecting Jesus Christ (John 3:18, 36). The choice is up to you, but knowing tomorrow might not come, today should be your day of salvation (2nd Cor 6:2). To sit on the fence about this decision is to risk having all on the other side of the fence along with those who sit on the fence cast into hell.

February 22, 2017
What The Bible Says About Prayer Cloths And Anointing Oil?
Next Post