What Does The Bible Say About Dreams And Visions?

What Does The Bible Say About Dreams And Visions? May 10, 2017 Jack Wellman

Many people claim to have had a vision or dream from God, so how can we know for sure that it is from God?

There is a lot about dreams and visions in the Bible and one of the first occurrences of a dream being interpreted is from Joseph who was thrown into prison after being falsely accused, and while there, “the cupbearer and the baker of the king of Egypt, who were confined in the prison—each his own dream, and each dream with its own interpretation” (Gen 40:5). After asking about the dreams, Joseph asked them a rhetorical question, “Do not interpretations belong to God” (Gen 40:8)? The obvious answer is God interprets the dreams and not Joseph or any man. I have not seen a Scripture where a man interprets the dream or dreams of another but only with God’s help. Pharaoh also had a dream “but there was none who could interpret them to Pharaoh” (Gen 41:8), so the cupbearer told Pharaoh, “A young Hebrew was there with us, a servant of the captain of the guard. When we told him, he interpreted our dreams to us, giving an interpretation to each man according to his dream” (Gen 41:12), so Joseph said to Pharaoh after he had a vision, “The dreams of Pharaoh are one; God has revealed to Pharaoh what he is about to do” (Gen 41:25), and so Joseph interpreted Pharaoh’s dream but only with the help of God could he possibly have understood them.

The Bible speaks about visions and dreams to occur in the latter days like with Joel the Prophet who wrote, “And it shall come to pass afterward, that I will pour out my Spirit on all flesh” (which happened on the Day of Pentecost), and “your sons and your daughters shall prophesy, your old men shall dream dreams, and your young men shall see visions” (Joel 2:28). God did pour out His Spirit on the Day of Pentecost and some had visions like the Apostle Peter’s vision about the unclean foods, which was God’s way of telling him that the Gentiles are to no longer be considered unclean. The Apostle Paul had “a vision of a man named Ananias come in and lay his hands on him so that he might regain his sight” (Acts 9:12), and that’s what happened, but Ananias wasn’t the source of this vision, as we clearly read in Scripture that it was from God, so it was never the figment of any person’s imagination, but rather, it was sent intentionally by God and for a very specific purpose. Even so, many claim to have had a dream or vision from God, but the Bible says “when dreams increase and words grow many, there is vanity; but God is the one you must fear” (Eccl 5:7), so fear of God and His Word trumps the dreams and visions anyone claims to have or has actually had. The Word of God is objective truth while dreams and visions are subjective and speculative, and why would God reveal His will in dreams and visions when His will is already revealed in Scripture? Any dream or vision should always be placed against the Word to see if it matches God’s purposes and will, and if it doesn’t, it was likely something they ate…or it could be from the Enemy. 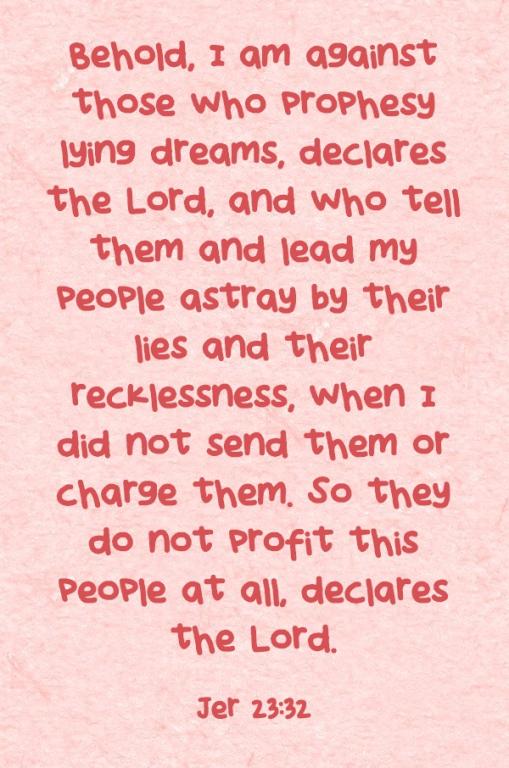 The Old Testament has several references to those who have dreams and says in Deuteronomy 31:1-3, “If a prophet or a dreamer of dreams arises among you and gives you a sign or a wonder,” and “if the sign or wonder that he tells you comes to pass, and if he says, ‘Let us go after other gods,’ which you have not known, ‘and let us serve them,’ you shall not listen to the words of that prophet or that dreamer of dreams. For the Lord your God is testing you, to know whether you love the Lord your God with all your heart and with all your soul,” and worse, “that prophet or that dreamer of dreams shall be put to death, because he has taught rebellion against the LORD your God” (Deut 13:5). The penalty for giving a false vision or dream was death in the Old Testament because God sees that as an attempt to speak for Him when God has already spoken in the last days through His Son (Heb 1:1-2), and by the Scriptures already delivered to the saints (Jude 1:3). That’s how God feels about people who claim to have a dream or vision from God when it clearly is not. God doesn’t use visions or dreams as the normative but rather He points us to Scripture, saying “You shall walk after the LORD your God and fear him and keep his commandments and obey his voice, and you shall serve him and hold fast to him” (Deut 13:4). Of course, God can send dreams or visions to whomever He wills, but again, this is not the typical and anything that is said to be dreamt or seen in a vision must be according to Scripture or it’s not from God.

If you or someone you know has claimed to have had a vision or dream from God, Jeremiah the Prophet warns them (and us) that God is “against those who prophesy lying dreams, declares the Lord, and who tell them and lead my people astray by their lies and their recklessness, when I did not send them or charge them. So they do not profit this people at all, declares the Lord” (Jer 23:32). Today, there are even “prophets” who “are prophesying lies in my name. I did not send them, nor did I command them or speak to them. They are prophesying to you a lying vision, worthless divination, and the deceit of their own minds” (Jer 14:14). Many men in the Bible did have dreams and visions like Ezekiel, Daniel, the Apostle John (in Revelation), but these are recorded in Scripture and are part of Scripture, and God was always the source of their writings, including their visons or dreams. Today, do we really need visions and dreams to put a “PS” to God’s Word? God may use a dream to try and tell you something, but unless it is scriptural, it is just a dream and dreams are so random that we can’t put any real stock in them. God is using dreams and can still use visions, but that is the rarest of exceptions from what I’ve read and heard. We are best served to put our trust in the Word and we will never have any doubt as to the way and the truth and the life (John 14:6).

May 12, 2017 Why Doesn’t God Heal Everyone?
Recent Comments
13 Comments | Leave a Comment
Browse Our Archives
get the latest from
Evangelical
Sign up for our newsletter
POPULAR AT PATHEOS Evangelical
1