What The Bible Teaches About Tolerance

Today it is politically correct to teach tolerance about everything, so what does the Bible teach about tolerance and how does it differ from the world’s version of tolerance?

Tolerance has been defined as having sympathy for a cause, person, or belief, even if it’s against one’s own personal preferences or beliefs. We can disagree with someone or something but still not be disagreeable. Tolerating is possible, even when it’s contrary to the person’s beliefs or practices, however tolerance of something or someone doesn’t mean you condone it. Tolerance can be in regards to pain, people, or things. The Apostle Paul wrote that we are to be “Bearing with one another and, if one has a complaint against another, forgiving each other; as the Lord has forgiven you, so you also must forgive” (Col 3:13). If we are not exhibiting tolerance toward those around us, then how can we expect to receive the tolerance of others when they disagree with us over something we do or believe, however there are somethings we cannot tolerate, like child abuse, violence, and abuse or neglect of the elderly, but that’s not what this article is about. It is about trying to understand what tolerance is so that we can be tolerant of others and their own way of life. It’s about opening a dialog of mutual respect and living peaceably despite any disagreements. It is accepting who others for who they are, even if it’s totally opposite of what we are like. Tolerance is not permissiveness, especially if it has legal consequences, so we are not speaking of tolerance for criminal acts, but people who have differing opinions and beliefs than we do. 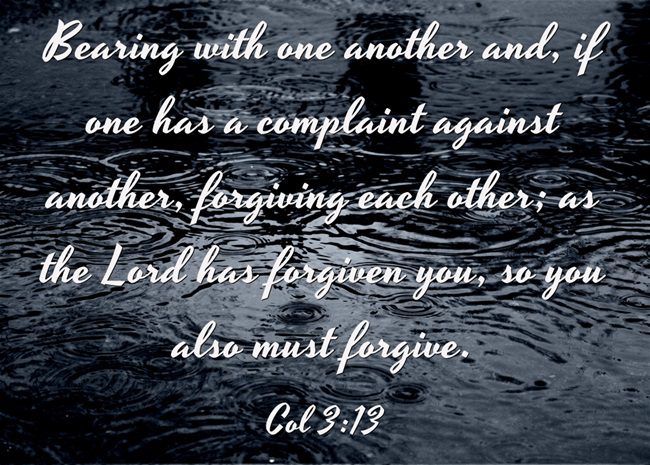 It’s almost like walking on egg shells today because whatever you say can be taken the wrong way. It seems we can tolerate just about anything except those who we disagree with, but again, tolerance is not condoning something. It is simply acknowledging someone’s right to believe differently than we do, or hold to certain beliefs or practices that we may not agree with, and by the way, having every right to do so. Of course Christians recognize that many of the things they see people do are sin, but those same believers should also recognize that they also sin (Rom 7; 1st John 1:8, 10), so casting stones is not our business. The Apostle John writes about a time when, one by one, they dropped the stone. This, after the woman caught in adultery was brought before Jesus, but Jesus would not condemn her, and neither did the Jews because they were not without sin. Jesus did tell the woman, “Go and sin no more” (John 8:11), but my question is, “Where was the man? Why wasn’t he brought before Jesus? Isn’t that a double standard?” What the Jews were doing was to try and trap Jesus. If He said to stone her, the Jews would have turned Him into the Roman authorities because “It [was] not lawful for [them] to put anyone to death” (John 18:31), however if Jesus had dismissed the stoning, the Jewish religious leaders would have accused Him of breaking the Mosaic Law, however Jesus came to fulfill the law…and the New Covenant, is a Covenant of Grace. The Old Testament laws were fulfilled in Christ and He is the end of the law (Gal 3). When we are asked what does the Bible says about something, we don’t offer our personal opinion, but we offer the Word of God, but Jesus never forced Himself on anyone, nor did He cram religion down anyone’s throat, so anyone that does that is not being biblical, and in fact, they’re doing more harm than good because this an drive them away. It is the Word of God that has effectual power to save (Rom 1:16; 1st Cor 1:18), and we certainly do not. Anything we can talk someone into, someone else can talk them out of.

The Apostle Paul’s very last letter before he was martyred contained commands for Timothy to not hold anything back in the Word of God, writing, “I charge you in the presence of God and of Christ Jesus, who is to judge the living and the dead, and by his appearing and his kingdom: preach the word; be ready in season and out of season; reprove, rebuke, and exhort, with complete patience and teaching” (2nd Tim 4:1-2). The word “charge” is an imperative command, and in the same tone as Paul who told the Corinthians, “I am writing to you not to associate with anyone who bears the name of brother if he is guilty of sexual immorality or greed, or is an idolater, reviler, drunkard, or swindler—not even to eat with such a one” (1st Cor 5:11), but doesn’t mean we don’t respect people. We must treat them with respect when we’re talking to them or talking about them, because some of such were we (1st Cor 6:11). We make a poor imitation of the Holy Spirit in trying to convict people of their sins…and besides, the Holy Spirit’s more interested in the sins we commit than those of others! Of course, it’s good and right to make sure the Body of Christ remains as pure and possible. What church would want a practicing thief to be the church treasurer? Who would want an adulterous man giving an engaged couple premarital counseling? The church has clear admonitions to instruct, correct, rebuke, and teach where and when it is necessary. God will hold church leaders responsible for their negligence of church discipline (Matt 18:15-20), however church discipline stops at the curb. Jesus never told the disciples to go out and “reform the world” but to make disciples of all people (Matt 28:18-20), but even that is not a “forced conversion,” but a calling by God (John 6:44). It’s not an external reformation of society but an inward conversion that shows external evidence. It is being salt and light, but holding the light in someone’s face that hurts, and too much salt ruins just about anything.

Christianity is not a set of rules, regulations, or laws. It’s not so much a religion as it is having a personal, saving relationship with Jesus Christ, and it’s not intolerant but truthful to say that Jesus is the one and only way (John 14:6). I rejoice that there is at least one way (Acts 4:12). Jesus says whoever comes to Him will not be turned away (John 6:37-39), and whoever believes in Him will be saved (John 3:16; Rom 10:9-13), but the gospel includes repentance and faith, which is exactly how Jesus described the gospel (Mark 1:14-15), and there is no other way to enter the kingdom than through Jesus Christ (John 6:44; Acts 4:12, 16:30-31).