Is America Headed for Another Race War?

Is America doomed to repeat the race wars of the late 1960’s? Can anything be done to prevent it?

In the late 1960’s, it seemed there were flowerchildren, beatniks, and hippies just about everywhere, and they were trying to bring in a new way of life…one of peace, and not of war; one that was opposed to killing. When television began bringing the Vietnam War into our living rooms, showing us one body bag after another coming home, it began to sway public opinion, and those who opposed the war began to grow in number. The more devastation and loss of human life we saw, the more people began to oppose it. By bringing the war into our living rooms, most Americans saw the true reality of war. Before that, the war was something you read about in the newspapers or saw news clips of on the nightly news, but when the news media started covering the war in a more comprehensive way, the American public began to shift their thinking, and they started to believe that this war just wasn’t worth it. Tragically, those who fought for their country were despised and looked down upon when they returned home, so when the service men and women who completed their tour of duty returned, they came home to find that many blamed them for the war. This, despite the fact that most of these young men were drafted against their own will, so the late 1960’s found the nation deeply divided…similar to what it is today.   It was as if America sat on a powder keg, and it would only take a tiny spark to ignite it. In the years leading up to the late 60’s, the pressure to end the war had been growing and it was dividing the nation, almost right down the middle. 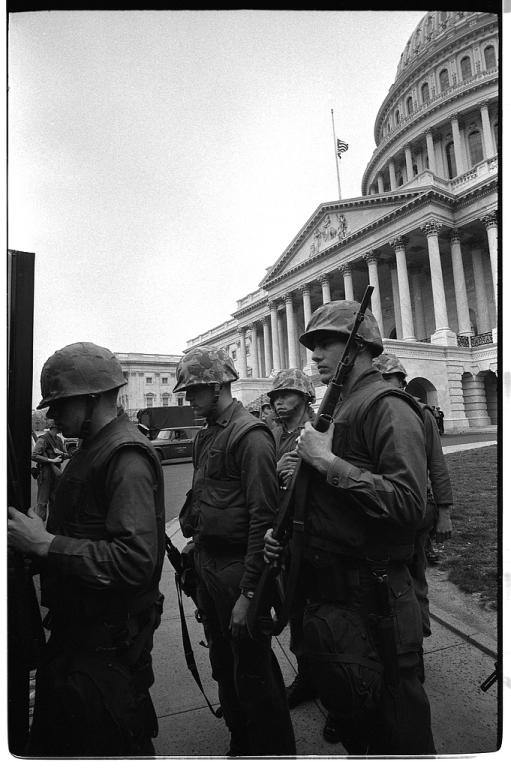 A Year of Violence

In 1968, I was in Junior High or Middle School (which it is called today), and lived in a neighborhood that was predominantly African-American, yet I had several friends of different skin colors. In that small neighborhood of Plainview, in Wichita, Kansas, it wasn’t a big deal. We were a “band of brothers,” of sort, but we sure didn’t think of it as a band of multi-colors.   It was perfectly normal to “hang out” with people who were different from me. We played football and baseball in the 40-foot wide meridian that ran down the middle of our neighborhood. What a person looked like didn’t matter to us. We were all friends and thought this was life the way it was supposed to be, but almost overnight, everything changed. Dr. Martin Luther King Jr. was assassinated in the spring of 1968. Then, to make matters worse, Bobby Kennedy Jr. was assassinated in Ambassador Hotel in Los Angles, just after winning the California presidential primary. A majority of young voters had placed all their hopes in him. Many were seeking peace by withdrawing from Vietnam but when Kennedy was killed, it became dangerous to walk in certain parts of the city and fear and violence escalated. Tear gas, tanks and the National Guard rolled in to the neighborhoods where we used to play. Most of my boyhood friends were just as crushed as I was over this because everything changed, or really, the summer of discontent had changed the way we looked at people changed. It was as if everyone’s heart was hardened, and now, more than ever, people were more skeptical or cynical about people of differing skin colors than they were just a couple of years ago. To us boys, it was never a problem…but now, we had all been sucked into a vortex of violence, destruction, and hatred, and our young world as we knew it would never be the same. The world had changed, but most of us still held to this truth; real friendship is colorblind. To me, there are no races but one…the human race.

I truly believe that more is caught than taught, because you can tell children one thing, but if you (or I) do another, we’re teaching them that words really don’t matter. Children are not born with prejudice and bigotry. It is learned. Children are so honest that they often say what’s on their mind, even if it’s not politically correct, but there is no way you can fool children. Teaching them one thing and then living another is only going to turn out badly…and even though the child might overcome this in their adulthood, they won’t forget their parent’s bias and prejudices, however, I was taught and now I am teaching my children, that it’s not a person’s skin color that is important. Each person is created in the image of God. Color does not matter. Every human being is worthy of respect and should be treated in that way. If we expect others to treat us in a way that does not discriminate, then we must treat others in the same way; without bias, prejudice, or having preconceived notions. We can assume far too much by looking at someone, but no one but God truly knows what’s inside a person’s heart.

Are we headed for the violence we saw in the late 1960’s? FBI statistics show that hate crimes against Muslims alone grew by 67% in 2015 (last available statistics), and extremist groups have quadrupled in the last 20 years and is among the fastest growing segments of the U.S. population. [1] Followers of Christ must choose to love and not hate. God loved us enough to die for us, and as far as us loving God, remember that He first loved us (1st John 4:19), so we must first love others and love them in a way as to show them we are Jesus’ disciples (John 13:34-35). No amount of apologetics will work as well as love. Followers of Christ have no excuse in showing prejudice toward another person who is different than they are. God accepts us through Christ regardless of our past and so we must accept others through Christ, whoever they are and wherever they’re from or whatever skin color they have. The Apostle Paul says, “There is neither Jew nor Greek, there is neither slave nor free, there is no male and female, for you are all one in Christ Jesus” (Gal 3:28). We are all created by God and created to glorify God, not to be the judge of others.

August 28, 2017
How Some Christians Place Personal Experience Over Scripture
Next Post

Hearts Changed Before the Credits Rolled
WILLS POINT, TX – Gospel for Asia (GFA World and affiliates like...
view all Evangelical blogs
What Are Your Thoughts?leave a comment
Copyright 2008-2020, Patheos. All rights reserved.