Atheism: A Null Hypothesis on God

It’s funny, but I realized that when I talk about myself in relationship to atheists I often sound like a post-civil-rights white person trying to minimize the gap between myself and another group. 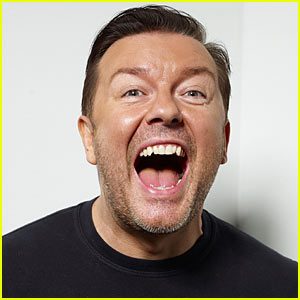 I don’t have anything personally against atheists.

Some of my best friends are atheists.

I even like Ricky Gervais. He’s an atheist, you know.

All of this aside, I have tried in vain over the years to understand atheism. I’ve written about it several times, and whenever I do, I get a bucket of responses from atheists. And of course if I’m ever feeling disconnected from my non-believing brothers and sisters, I really have to go no further than the comment board on the Huffington Post (it seems they have quite a fascination with my articles there).

Try as I may to get atheism, I still don’t. I do, however, see where agnostics are coming from. In fact, I identify myself quite often as a Christian agnostic. This from the website, Infidels.org on the origin of the word:

The actual Greek roots of the word, “a-gnosis” means, “without knowledge.” Basically, Huxley asserted that he didn’t feel he had 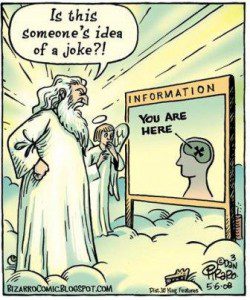 sufficient understanding either way to say with certainty that God does or does not exist. And really, if we consider the centrality of faith in the context of the metaphysical, no one KNOWS that God exists, or else they would have no need for faith. I understand that some will say their faith is so strong that it feels to them like certitude, but that is different than truly knowing.

There’s also the notion of “deep knowing,” which some people claim supersedes the vagueness of agnosticism. But again, in considering the actual etymology of the word, the type of knowledge Huxley is talking about is a cerebral, intellectual knowledge, not a gut feeling, regardless of the strength of conviction.

So by this definition, we’re all agnostic, really.

And that’s why I struggle to understand atheism.

Etymologically, atheism has similar Greek roots to agnosticism, coming from the words “a-theos” which means “no God” or “without God.” This implies the same kind of certitude that a religious fundamentalist might claim is arguing they “know without any doubt that God exists.” Based on what? Either of you? There is no way to prove or disprove the existence of God. Especially when we can’t even nail down what exactly it is we’re talking about.

For some, God is an anthropomorphic “other.” For others, as philosopher John D. Caputo suggests, it’s not that God exists as some independent metaphysical entity, but rather God “insists, so that the rest of creation might exist.”

Put another way, God is the impetus, the spark, the divine breath, the “inspiration,” if you will from which all the rest of creation finds meaning. But God is not to be found “elsewhere.” It’s more like light in that way, conspiring with the physical world to create something that makes sense. Yet to borrow a scientific concept, when you’re seeing an object, what you’re actually seeing is the light, or more specifically, the result of the interaction between the light and the observed object.

But you don’t see the thing itself; you see the light. But the light is the means by which we find meaning in all that we see.

Pretty amazing understanding of God if you ask me. But how do you measure it? How do you prove it? Or disprove it?

But here’s the thing. At one time, atomic particles were not observable, given the instruments at our disposal. Neither was dark matter. Or gravity, for that matter, which still cannot be directly observed: only measured as it affects other objects. It’s not a “thing” that can be pinned down.

I respect the process and constraints of the scientific method. It has been critical to so much of the advancement we’ve made as a species. but to say that even science is entirely constrained by the scientific method is to ignore the creative imagination required to stretch the boundaries, to imagine what might be, beyond what is now understood to be. It’s this kind of imagination that pushes humanity to create new tools that have allowed us to observe things we never knew existed before.

But all of those things – and I’d argue, much more we’ve yet to discover – have been a part of creation, despite out inability to observe or even conceive of them. Making room for those possibilities, seem, to me, to be at the heart of science as much as the rigorous processes defined by the scientific method.

In my graduate studies, I learned that every time you formed a hypothesis (God is), you were also required to develop a null hypothesis that says the opposite of your hypothesis (God isn’t). Keep in mind that there are no “facts” in science, but rather hypotheses (educated guesses) and theories (hypotheses that have been supported by science, but that may ultimately be disproved). Now, I’m not a scientists, but it makes perfect sense within this model to have the “null hypothesis” that God doesn’t exist.

However, to leap from that to certitude of God’s non-existence is to violate the principles of the scientific method, isn’t it? Even Aristotle conceded that the boundaries of science prohibited it from testing certain metaphysical phenomena such as the existence of God.

It seems to me, to paraphrase Paul (like Huxley), that we risk becoming that which we hate in staking claims of certainty on either side of this issue. In pushing back primarily against religious fundamentalism, atheism risks embracing the very fundamentalism it resists. And in doing so, it abandons the very principles of science it claims as the basis for non-belief.

I can work with a null hypothesis on the existence of God. There’s room for dialogue. It creates space for creative imagination on both sides, whereas fundamentalism of any stripe seeks to draw lines of distinction (ie, division) and to stem conversation for the purpose of “being right.”

I don’t know if God exists. You don’t know if God doesn’t exist. But if scientists can not only coexist on both sides of a hypothesis, but even use that difference to promote progress, it seems we can and should apply similar principles to the public forum.

January 14, 2012
From Sex to Satan, Some Churches Will Try Anything
Next Post

10 Things You Can't Vote For...
The God Article with Mark Sandlin
Related posts from Christian Piatt

Evangelicals need to know: another shocking killing by...
Every day, I report on the situation in Israel-Palestine. Every day, I...
view all Progressive Christian blogs
What Are Your Thoughts?leave a comment
Copyright 2008-2021, Patheos. All rights reserved.