From Sex to Satan, Some Churches Will Try Anything

I wrote a piece earlier this week about Pastor Ed Young and his wife doing a 24-hour live webcast in bed from the roof of their church to promote their new book, Sexperiment: 7 Days to Lasting Intimacy With Your Spouse. Though I’m glad evangelical churches have begun talking more openly about sex in recent years, the whole situation reeked of a brazen publicity stunt.

Then comes the new horror movie, The Devil Inside, which has opened 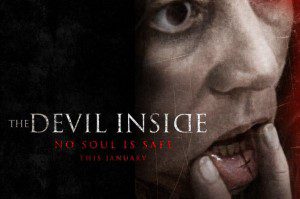 to anemic single-digit approval ratings on Rotten Tomatoes and has been panned as derivative and completely disjointed. But not one to miss out on an opportunity to get butts in the seats, Westminster Presbyterian Church in Pasadena, California actually rented out their sanctuary for a screening of the film. Reportedly there were priests and/or ministers at the ready both to offer blessings as people entered and to offer counsel during and after the film if folks were freaked out.

By the way, I’d offer a link to the church’s website, except that it’s been deactivated. I’m just guessing, but I would not be surprised if the site crash had something to do with the screening and the buzz it’s generated.

This is a touchy subject for me, as I am a strong advocate of bringing cultural criticism and dialogue into the church, and I’m equally supportive of churches having frank forums where they deal with issues of sex and sexuality. But there is a distinct, if not fine, line between stretching a church to be relevant and jumping on the latest trend simply to draw attention to yourself.

Yes, I know religious institutions are collectively flipping out about the decreasing number of attendees and increased number of church closures. The fact is that some churches will do the world more good once closed than they’re doing today. This is not to say they’re doing active harm (though I’m sure some are), but rather that the tireless, copious use of resources – both human and financial – to prop up dying institutions is to point to one’s self rather than toward God. We get hung up on the idea that the former is a necessary means to the latter end, but not necessarily. Like a fallowed field, sometimes it’s best to take what is left, turn it into the ground and allow it to be reborn into something entirely new.

This whole idea of orientation is at the heart of my concern about attractional events churches use to draw attention to themselves. The fundamental question we as church leaders must ask ourselves is:

How, if at all, does this point us and others toward God? Are we serving God in this moment, or are we actually serving the institution, with the possibly misguided hope that, once righted, it will then serve God?

I’m a champion of churches reaching out toward the intersections of faith and culture. I’d even argue that there’s a place for “secular” film in faith communities in certain circumstances. But it’s an insidious transgression of many churches to engage in idol worship of their own institution, while deceiving themselves into thinking they’re actually living out the Gospel.

We bear the responsibility of knowing the difference.