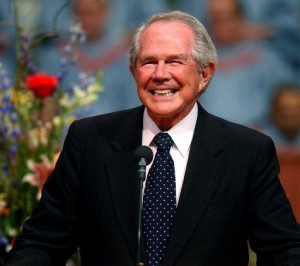 Even a blind squirrel finds a nut once in a while. A million monkeys typing for a million years would eventually produce Shakespeare.

And once in a blue moon, Televangelist and 700 Club head Pat Robertson and I agree on something.

When asked about his position on the decriminalization of marijuana, Robertson said the following:

“I just think it’s shocking how many of these young people wind up in prison and they get turned into hardcore criminals because they had a possession of a very small amount of controlled substance. The whole thing is crazy.”

Where Robertson and I diverge is when he starts placing blame for this stricture. Not surprisingly, he finds a way to blame the liberals in Washington DC for the overreaching controlled substance law. He claims we, as a society, are “turning a bunch of liberals loose writing laws,” and that there’s a “punitive spirit” with the democratic agenda.

He must not be hanging out with the same democrats I do, because most of them agree with the idea of decriminalizing marijuana.

It seems to me that, based on professed political agendas from both sides of the aisle, this one should be a slam dunk. There’s a groundswell among states to take this matter into their own hands, which should appeal to the “states rights” advocates on the rights. And the idea of keeping government from legislating morality should hold sway with most on the left.

So mark it on the calendar, kids. Pat Robertson and I fall on the same side of this issue.

I suppose it’s not surprising that government and politics make this more complicated than it really seems like it needs to be. The whole marriage debate serves as precedent for this tendency to muck up the waters.

The argument rages every election season about gay marriage rights. States seems content to take this on at their own level of government, yet those on the right who claim to advocate for smaller federal reach seem to suffer from legislative amnesia when it comes to this one.

But why not take it a step further and end the debate for good? Why is the government in the business of recognizing marriages anyway? The power to grant civil unions makes sense for government to maintain, but marriage, it seems, is a religious ritual. And there’s a fairly significant consensus among voters to grant civil unions to same-sex couples. So limit governmental reach to civil unions, and afford everyone who has them (same sex partnerships included) the same rights the rest of us enjoy.

Again, this should appeal to small government, states rights advocates on the right, while supporting the more affirming agenda of social equality on the left.

Then if churches choose to recognize marriage for same-sex couples, they can. If not, so be it. And those who feel marginalized by their decision to exclude based on sexual orientation should not feel compelled to support their institutions. And those who do determine that it’s within their calling to ordain same-sex marriages do so as a ceremonial gesture, which is on the same level as all other marriages, absent any government authority.

Is it just me, or are these hot-button issues made more complicated for the sake of political theater, rather than for the betterment of the society the government supposedly serves?

March 6, 2012
Anger, Fear and the GOP Implosion
Next Post

March 8, 2012 Worship, Evangelism and "Earning the Right" to Invite
Recent Comments
6 Comments | Leave a Comment
"awesome."
Brandon Roberts Not “That Kind” of Christian
"nice article."
Brandon Roberts Talking Sex with Invisibilia’s Hanna Rosin
"Thanks for a fun romp. As a Presbyterian minister, I would have welcomed you gladly ..."
Zeigler John Leaving A-Holiness Behind
"Dear Sarah and Christian,I'm sorry for what has happened to you and your mother and ..."
Amazingaljicrowley3679 Letter From a “Demon Possessed” Woman
Browse Our Archives
get the latest from
Progressive Christian
Sign up for our newsletter
POPULAR AT PATHEOS Progressive Christian
1

Can You Be a Christian Capitalist? Can You...
There is nothing that attracts the ire of various commenters on this...
view all Progressive Christian blogs
What Are Your Thoughts?leave a comment
Copyright 2008-2020, Patheos. All rights reserved.