A Higgs Boson Walks Into Church…

Thanks to Steve Knight for alerting me to this joke, which has become one of my instant favorites. After all, it combines two things I dig: nerd humor and theology (also nerdy). 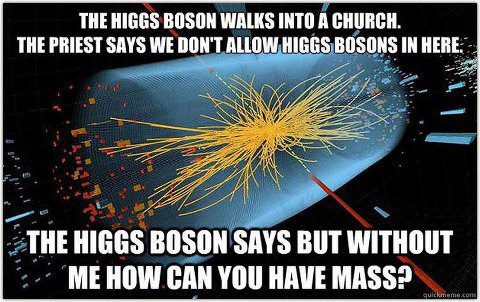 Yeah, yeah, you may be groaning, but you’re smiling while doing it. Admit it.

There’s plenty of chatter lately about the so-called “God Particle,” recently discovered , with some in the scientific field actually calling it the “goddamn particle,” because (at least as I understand it) the discovery opens up the possibility of something without detectable mass actually giving mass to other particles.

Kind of like: In the beginning there was nothing, and then…

Back to the Higgs boson for a second. Based on my very limited scientific understanding, I believe the gist of the discovery is of an energy field, and not an actual massive particle, per se. This field, called the Higgs field, has been theorized to exist for almost fifty years, but was only finally detected using the Large Hadron Collider and a butt-load of really big computers that weren’t available back then. The “boson” part of the name is for a particular excitation in the Higgs energy field that, given the proper conditions, seems to be able to give mass to these other particles we knew existed, but which we haven’t known where they might have come from before.

Enter the Science vs. Religion cage match. Church leaders assert that all matter was created by God, to which scientists say “nonsense.” So with the Higgs boson discovery, some in the sciences are effectively saying, “Here is your ‘God.’ You wanted something from nothing; here it is.”

What is likely to follow is a pattern we’ve seen for centuries. Some religious leaders will try to use various theological or philosophical gymnastics to tear down the scientific findings, arguing some tragic flaw in their work. Others will see this new discovery as an inevitable truism that cannot be ignored, and so, if their belief structure is to stand the test of time, it must adapt to accommodate this new knowledge.

Then scientists accuse the Church of blind opportunism and the Church fires back that their sole mission seems to be the death of God, rather than the birth of new knowledge.

For me, it seems that we’re confusing the purpose of the two distinct fields. While science primarily is focused on answering the universal question of “how?” philosophy and religion delve into the question of “why?” But human nature and our hubristic inclinations being what they are, we seem forever intent on overstepping the limits of our respective disciplines in an effort to offer a single panacea that will end the conversation in favor of our own side, once and for all.

My greatest consolation in all of this isn’t that we’re any closer to ending the dialogue between science and faith. As I said, they’re asking two very different questions. But I do find hope in the increasing popularity of postmodern thought, in which such binary, either/or dichotomies as the “church vs. science” mindset seem increasingly irrelevant.

As such lines blur, the boundaries between apparently discreet fields become more permeable, allowing those in the fields of science to think more imaginatively or even philosophically about their work. Einstein was a great proponent of this way of approaching science. He famously said “if I can’t picture it, I can’t understand it.” For him, creative imagination was not the bane of science, but rather was critical to his process of discovery. On the other hand, such permeability between the fields requires religious leaders to let go of some of their fears and desire to maintain permanent, rigid ideas of what lies at the heart of God and humanity.

I’m personally exhilarated by the new discovery, and I welcome the opportunity to enrich both my understanding of “how” and “why” in the process. Now, if I could only find a picture of Jesus holding the Higgs boson, blessing it and saying “This is my body…”

July 17, 2012 Helping Churches Die Right
Recent Comments
18 Comments | Leave a Comment
"awesome."
Brandon Roberts Not “That Kind” of Christian
"nice article."
Brandon Roberts Talking Sex with Invisibilia’s Hanna Rosin
"Thanks for a fun romp. As a Presbyterian minister, I would have welcomed you gladly ..."
Zeigler John Leaving A-Holiness Behind
"Dear Sarah and Christian,I'm sorry for what has happened to you and your mother and ..."
Amazingaljicrowley3679 Letter From a “Demon Possessed” Woman
Browse Our Archives
get the latest from
Progressive Christian
Sign up for our newsletter
POPULAR AT PATHEOS Progressive Christian
1

God Said It, I Believe It,...
Freelance Christianity
Related posts from Christian Piatt