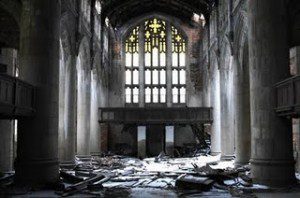 I was having lunch with another couple in ministry that shared a disturbing story with us. The problem isn’t so much in the uniqueness of the story they told, but rather in how incredibly common it is.

The couple had connections to a congregations several hours away that is located in the heart of a thriving urban center. The aging congregation was down to only 40 regular attendees, and had released all of their paid staff, opting instead for volunteers to lead worship for them when they could secure them.

Meanwhile, they gathered in a building, valued at roughly $9 million, which they could not afford to maintain.

This church, like so many others, seeks answers to questions about how to survive in an increasingly secular, disparate and religiously wary culture. Their hope, like plenty of other churches, is that something or someone will come along to save them, keep the institution going and propel them into the future for another century.

Oh, as long as they don’t have to change.

I’ve had some conversations like this with congregations who think they’re well-meaning, but who are actually standing in the way of God’s Kingdom being more fully realize,d as I understand it. What is said is that they want the church to continue so it can serve the community, but in truth, many of these congregations have ceased to serve anyone other than themselves for some time. Instead, they sit on piles of money, disguised as dirt, stone and stained glass, wondering why things can’t just go back to the way they used to be.

This kind of situation reminds me of the story of the rich man who comes to Jesus and asks him what he needs to do in order to find salvation. Jesus’ 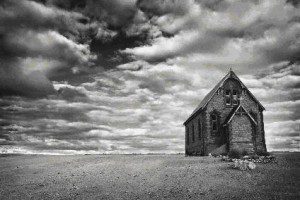 response: it’s easy. Just let go of everything here in this world that is holding you back. The path is laid out before you, yet you’re so bogged down with your baggage that you can’t even move forward.

It also make me think of the famous experiment with the Rhesus monkeys, where the scientists put a banana inside a jar with a narrow mouth. The opening is big enough for the monkeys to stick their hand in, but not large enough to pull it out while also keeping a grip on the banana. The story goes that the monkeys are so intent on keeping the banana that they remain trapped by the jar, even though all they have to do to be free is to let go.

Such is the state of many of our churches today.

Having been a partner in a new church plant nearly a decade ago, I think of how many dozens of new congregations could be seeded with $9 million. Or maybe that’s not what the community there needs most. Perhaps they need an affordable housing complex, or emergency services, a low-cost childcare facility or an emergency food bank.

Think of how many meals could be provided with $9 million. The problem is, the monkey has to let go of the banana first.

It’s a tough discussion to have, helping churches plan their own death with dignity. And not all churches would do more good dead rather than alive – at least that’s my opinion. There are lots of congregations offering hope, community, service, healing and discipleship that would be terribly missed without them. 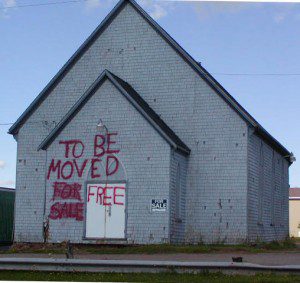 But money, as they say, is a lot like manure. Spread it around, and things start to grow from it. Keep it hoarded in a big pile, and all it does is stink up the place.

Even the Book of Ecclesiastes reminds us that everything has its time, place and cycle in life. There’s a time to be born, and a time to accept that death is the best, right thing. Yes, we have much invested in our communities of faith: in the facilities; the history; the relationship and the vision for what they could be. But these can’t stand in the way of living out the call to selflessly serve the world to which Jesus points us.

Sometimes, all you have to do to serve is die.

July 18, 2012 Should Christianity (as we know it) Survive?
Recent Comments
9 Comments | Leave a Comment
Browse Our Archives
Related posts from Christian Piatt