Should Christianity (as we know it) Survive?

There’s been an interesting discussion going on about the future of Christianity in America. Though there have been arguments back and forth about who is worse off – liberal or conservative Christians – for some time, the dialogue has become more concentrated as of late, following the Episcopal Church’s decision to bless same-sex unions.

This, some conservatives claim, is yet another symptom of a Church in moral decline, and their shrinking numbers are proof positive that they have strayed from Biblical principles of discipleship. Then some liberals shoot back, pointing out that, although mainline and progressive denominations have been losing members longer, the same has been happening for years, if not decades, in every conservative Christian denomination as well. Yes, there are big megachurches, most of which tend to be conservative, But these are statistically an aberration in a greater negative trend across the board.

The infighting reminds me of what happens when you put a bunch of crabs or lobsters in the same small bucket. As they clamor to get out, they’ll climb on top of one another, and even pull each other back down as they attempt to gain purchase to help them escape.

Meanwhile they all sit there in a pile, getting nowhere fast.New York Times columnist Ross Douthat, himself a Roman Catholic (also in decline for years in the US), penned a column called, “Can Liberal Christianity be Saved?”. Ultimately, his conclusion is “no,” because he argues that any religious group married to contemporary liberal social values is wedded to a fleeting trend that is unsustainable. The movement, then, has no true center, and thus no soul. And as such, God does not honor such self-serving efforts.

Then, on the other side of the debate, Diana Butler Bass writes in a recent Huffington Post article called, “Can Christianity Be Saved? A Response to Ross Douthat,” that the question Douthat poses is too narrow, given the evidence of decline in all areas of institutional Christianity. The question she prefers is whether the whole of Christianity can be saved and, if so, is liberal Christianity positioned to save it?

I’ll preface my following thoughts with the qualification that I love Diana Butler Bass as a person, writer and theologian, and I also agree with many of her points. However, I think there are two fundamental problems with the current dialogue that I feel compelled to point out.First, the whole liberal/conservative dichotomy presumes a modernist worldview that I don’t think is particularly relevant

any more. Few people under the age of 40 care much for identities such as “liberal/conservative,” “democrat/republican” or “protestant/catholic.” We tend to feel boxed in by such proscriptive labels, and others’ attempts to apply such definitions to us smacks of opportunism simply to count us an another warm body within their ranks. The thing is, we don’t tend to care about your institutions in the way you do.We care about the people we’re in relationship more than their party or denominational affiliation. I know socially progressive evangelicals and radically liberal orthodox Christians. We are increasingly identifying as political independents, namely because we don’t feel we owe either party anything. Same goes for religion, which brings me to my second point…

There seems to be an assumption that institutional Christianity, in and of itself SHOULD survive, simply because it has in the past. And although a robust case can be made in defense of maintaining organized religion in some way similar to how it’s been in the past, I’m not entirely convinced (nor are many of my contemporaries, I’d argue) that this is the best and truest way to serve the mission to which we’re called by the Gospel.

In so much as denominations or networks of churches seek to marginalize or treat any other class of people as “less than,” the Body of Christ is better served without the power of their institution to back up their intolerance, neglect and even violence. To the extent that denominations or individual churches are more focused on institutional survival for the sake of itself over the mission of Jesus Christ, they, too should go the way of the temple in Jerusalem. 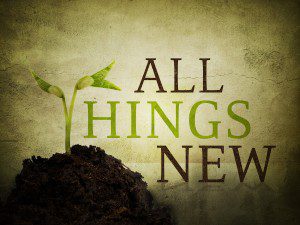 It seems that we’ve gotten into a mindset where we believe that Jesus’ ministry and mission in the world is dependent on the survival of Christianity as we now understand it. But this presumption is a set-up to worship religion, rather than a savior. I don’t need the church to find God; no one does. To the degree that Christianity, on a marco- or micro- scale, is daily, materially, radically making real Christ’s message to a world that needs it, we claim a faith that believes we will have what we need for the journey.

As for the rest, as the prophets and Christ himself said: there will come a day when not one stone will be left, one on top of another.

July 19, 2012 Gospel Coalition's Views on Gender, Sex Aren't "Complementary"
Recent Comments
17 Comments | Leave a Comment
"This blog is dated March 2016. It wasn't that good then and it's no better ..."
Bob Shiloh Five Ways “Representative Democracy” is Failing ..."
"sounds cool."
Brandon Roberts Untitled
"cool."
Brandon Roberts Christian Panders, Fundies for Sanders, Bible ..."
"I believe taking calculated risk are super important. having the faith that it will work ..."
Sean Lewis 25 Christian Blogs You Should Be ..."
Browse Our Archives
Follow Us!