I first heard about the movie “Hellbound?” (coming out this fall) at Wild Goose Festival. They were offering an advance screening of the movie, and although I was just passing by the tent at the time, the subject matter stopped me where I was. A thoughtful, well-researched, accessible discussion about the history, purpose and prospects of hell in Christian theology?

The film opens with reflections on September 11th, including a ten-year anniversary memorial event at the site. And as would be expected, the infamous picketers from Westboro Baptist Church were there, complete with signs bearing slogans like “Thank God for 9/11” an, of course, “God Hates Fags.” The movie progresses to, let’s say, more educated points of view, focusing more on the front end on those who advocate for a real hell that is populated with innumerable souls experiencing eternal conscious torment.

But then the movie breaks off from the oft-quoted pro-hell camp and considers the social and historical backdrop for hell, as well as extensive screen time for the doubters and skeptics about the reality of such a place. Folks offering counters to the “traditional” evangelical view of hell include Brian McLaren, Frank Schaeffer and an Eastern Orthodox priest, all offering fascinating tidbits meant to expand our understanding of where this modern-day understanding of hell even came from, let alone whether we claim a God who would send people there.

A few of the more compelling points I took away from the movie:

There were a few clear weaknesses in the film, none of which were so profound as to compromise its overall value. But I was disappointed that nearly everyone interviewed was a white male. One of the only women appearing on screen with a speaking part was a representative of Westboro Baptist; hardly a fair cross-section. Also, there was a noticeable absence of voices along the lines of John Caputo and Peter Rollins, who are exploring along the edges of postmodern Christianity, as well as scholars like Brandon Scott, Marcus Borg and Dominic Crossan who are committed to a study of the “historical Jesus.” Most speakers expressed what I would consider a “higher Christology,” and refer to God n all cases as a “He.” 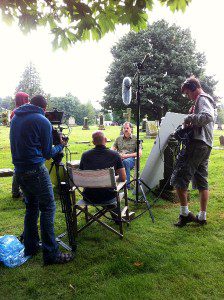 On the whole, “Hellbound?” is a thoughtful, important look at a debate that has boiled over following the publication of Rob Bell’s book, “Love Wins,” also referenced throughout the film. I’d venture to say that the creators of the movie lean toward Universalism themselves, given the face time afforded those of this view, but voices from across the spectrum certainly have their say as well.

The only “gotcha” bit of journalism came toward the end, when writer/director, producer Kevin Miller is debating with the Westboro Baptist folks about how God can have both “perfect love” as they claimed, which is far beyond the human capacity to love, while also pre-ordaining that some people were doomed to hell from birth.

“How many children do you have?” Miller asks one man from the Westboro church.

“And how many of them do you love?” says Miller. His follow-up is met with awkward silence, which is rare with a Westboro spokesperson. He saw the writing on the wall, as it were, and knew better than to try and actually answer the question. But left unsaid here is the thrust of the movie that is asserted by several others throughout:

Why would a Creator give life to something, bound both to temporal sin and to eternal suffering for that temporal sin? Can such a God be considered loving while also leaving those beloved to suffer conscious torment forever? Ot has hell become the church’s ultimate sales pitch, the trump card that lends it authority over its faithful, without which it would be rendered largely impotent in its efforts to coerce people into adherence to its doctrine?

Meanwhile, the politics of hell and the debate that surrounds it, rages on.

Fore more about the movie, and to see a promotional trailer, visit: www.hellboundthemovie.com

September 24, 2012
Did Jesus Get Married and Have Children?
Next Post