Did Jesus Get Married and Have Children?

Did Jesus Get Married and Have Children? September 24, 2012 Christian Piatt

It’s amazing what a difference six words can make in our understanding of a figure as central as Jesus to the lives and faith of so many. Even historians and others who don’t claim Christianity personally are intrigued by the scrap of text recently discovered to contain, in Coptic, the sentence fragment: “Jesus said to them, ‘My wife…'”

Was this Jesus of Nazareth? is it authentic? Did the author have an original source to pull from, or simply word-of-mouth legend? After all, this writing seems to be several hundred years newer than the synoptic gospels. Perhaps Jesus was speaking in parable, as he often did, or maybe the “wife” was the Church, which often is referred to as “the bride of Christ.” Who knows? It’s likely we never will, but the buzz that this find creates is more interesting to me than the source of the scripture itself.

Why do we care so much if Jesus had a wife and kids or not? Why does it seem to matter if he died without ever having sex? Why does it make our skin crawl to consider the prospect of him having sexual fantasies? In Banned Questions About Jesus, the second book in the Banned Questions series I edit, we took on a similar question, so I thought I’d share several responses to the question below that are found in the book.

Is it possible that Jesus married and had children? 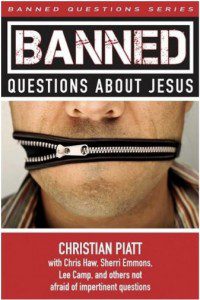 Christian Piatt: It’s certainly possible. There have been theories about this for centuries, but interest in Jesus’ direct bloodline has exploded since The Matrix films and the Da Vinci Code novel brought the Merovingians into popular consciousness.

Though there is no record of Jesus marrying or having children, there are historical myths that a sect of the Merovingians secretly protects the direct bloodline of Christ. It’s an intriguing concept, but again, there’s no actual evidence.

More interesting to me is why some people feel so strongly that they must argue that Jesus didn’t marry or have kids. More specifically, the issue seems to focus on the problem some people have with the possibility that Jesus ever had sex.

The western, puritanical consensus around sex generally is that it’s inherently dirty or sinful. And of course, there is plenty of material in the Bible that can support this attitude, such as Adam and Eve being made aware (ie, ashamed) of their nakedness, and the very idea that Jesus was born of a virgin.

From one perspective, the Immaculate Conception makes room for God’s direct intervention into the beginning of Jesus’ life. But seen another way, it removes the actual act of sex from his creation. This makes it easy for us to lay our judgments about sex onto the Christian faith.

Of course, this attitude is hard to reconcile with other sacred texts, such as the Song of Songs, which celebrates sexuality and the act of sex itself as a wonderfully integral part of the human spiritual experience.

So was Jesus any more or less human or divine if he had sex? Our answers to this seem to tell us much more about ourselves and our own attitudes about sex than it does about Jesus.

Peter J. Walker: Making absolute statements about someone who lived 2,000 years ago is unavoidably perilous.  Still, there is a host of ancient writings that more-or-less affirms the Gospel accounts of Jesus’ celibate life.  There are only a few extant texts – most of them more historically questionable than their canonical counterparts – that argue otherwise. But I’m no archaeologist or scholar.  Rather, I want to address the cultural landscape on which this question arises.

Christianity habitually adopts all-or-nothing “political platforms” that set itself up for implosion if one tenet is determined untrue.  So every time we discover that the earth is round, or the universe is older than 5,000 years, or women are people, or sexuality isn’t “chosen,” the first response is denial, the second response is loss of faith (by untold thousands) and the final response is eventually adaptation or accommodation.  But by the time Christianity adapts to new paradigms, the rest of the world is far ahead of us – so much so that they stopped caring about what we were arguing over, long ago.  And we wonder why our “Good News” seems so stodgy and lifeless. We keep fighting the wrong battles, taking our eyes off the liberating mission of Jesus’ new kind of humanity.

So here’s my question in response: if we’re wrong about Jesus, and he did marry and have children, does it change the truth?  I’m not saying I believe that.  I’m saying I’m prepared to adapt and keep my faith if I discover we are wrong.  The survival of my relationship with Jesus is more important to me than the survival of my Christian orthodoxy. That’s a matter of choice, as all matters of faith tend to be.

Shannon Moore: I guess anything is possible. But I don’t think the idea that Jesus married and had children is probable.

Despite what we’ve heard and read in recent years from novelists, dreamers, and/or conspiracy theorists, nothing in the Bible indicates that Jesus was married or had any children. Now, while I certainly don’t believe that every detail of Jesus’ life is described in the scriptures, it stands to reason that something as important as a spouse and kids would have merited at least a mention.

And contrary to popular belief, Jesus did not focus on the family. He said that his teaching would bring division to households, and that we should love God more than our families. Accordingly, Jesus didn’t seem particularly attached to his family.  In three of the gospels, he basically disses his mom and siblings (who are outside waiting to see him), saying, “Who is my mother, and who are my brothers? Whoever does the will of my Father in heaven is my brother and sister and mother.” Harsh!

Jesus focused on fulfilling his destiny as the Messiah, the Savior of his people. Quoting the ancient prophet Isaiah, he said as much in the synagogue in his hometown: “The Spirit of the Lord is upon me…he has anointed me to bring good news to the poor…to proclaim release to the captives…to let the oppressed go free.” All that might be difficult to achieve if you’re trying to keep the wife happy and the kids fed.

September 25, 2012 New "Hellbound?" Movie explores, Challenges Christian Doctrine of Hell
Recent Comments
10 Comments | Leave a Comment
"awesome."
Brandon Roberts Not “That Kind” of Christian
"nice article."
Brandon Roberts Talking Sex with Invisibilia’s Hanna Rosin
"Thanks for a fun romp. As a Presbyterian minister, I would have welcomed you gladly ..."
Zeigler John Leaving A-Holiness Behind
"Dear Sarah and Christian,I'm sorry for what has happened to you and your mother and ..."
Amazingaljicrowley3679 Letter From a “Demon Possessed” Woman
Browse Our Archives
get the latest from
Progressive Christian
Sign up for our newsletter
POPULAR AT PATHEOS Progressive Christian
1