The Wild Goose Festival was awesome as expected this weekend in Corvalis, Oregon. About a thousand folks gathered for the first-ever west coast version of the event started in North Carolina. There were artists, theologians, pastors, hippies, activists, poets and any number of other curious observers, navigating the landscape to better understand where this movement might be headed.

I offered a workshop on Saturday with Brian Ammons and Bruce Reyes Chow on masculinity and male identity. Folks gathered in the small animal arena on the fairgrounds where the event was held to hear about, and respond to, male identity from three fairly distinct perspectives. It was a rich conversation and pretty fun, at least until one question came toward the end, from a guy in the back row.

I suppose we should have seen it coming, but we had gotten a little too comfortable. The following is a paraphrase of what he said, but the essence is the same. 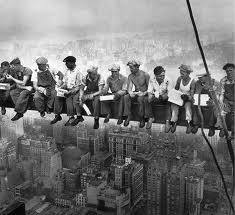 “Why is it that everyone seems to be criticizing men these days,” he said, “and no one takes the time to thank us or to celebrate us and all the we’ve done. Look around; more or less everything you see around us, we’ve built. Where’s the celebration for us?”

The three of us on the panel looked at the microphone as if it had suddenly been thrust in front of our faces at some high school debate tournament. For three guys known for always having opinions about nearly everything, we were notably silent. My wife, Amy, actually got up to respond, as we had opened the conversation to everyone in the room. She did well masking her rage (which she revealed in full to me later in private), but I’ll admit that I heard scarcely little of her response because my mind was still swimming with all the things I wanted to say, but probably shouldn’t.

But I’ve had a little time to process, and it seemed like an appropriate topic for Labor Day, so here are my more nuanced responses.

For starters, to suggest that men have little space left on the world stage for attention, recognition and celebration seems fairly myopic about the reality around us. From the political sphere to the silver screen, television, professional (and college) sports and other realms of popular culture, men continue to get more than our fair share of credit and attention. More than that, we get more money for the same work, and we have more power given our numbers. The very fact that we’re not the only ones in the spotlight any more hardly means we’re ignored.

And let’s not forget the mark we’ve left on the annals of history. Take a gander at Mount Rushmore (white guys), read about the Lewis and 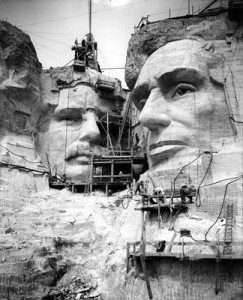 Clark Trail (not called the Sacajawea Trail, mind you), or at any number of monuments around our nation’s capital. I can only imagine what it’s like to gaze upon the historic (and present-day) faces of power, only to see so many faces looking back at me that hardly resemble my own.

On to the comment about building everything we see. First, it’s hard to know exactly what the man meant by “we” but given that all appearances suggested he was male and of largely Anglo descent, the comment struck the group (at least those who responded to me afterward) as speaking in part on behalf of white males.

I wonder how the comment sounded to my Native American friends in attendance, whose land was stolen out from under them to built all we saw around us.

I wonder how our African-American and Latino friends felt, knowing that our colonial history has depended (and in some ways, still depends) on exploiting the labor of other people for little or no compensation, and often by force.

I wonder how the women felt, both those who have sustained families with love, wisdom and myriad material provisions, as well as those engineers, manual laborers, scientists and architects who, too, have built what we enjoy and use every day.

I suppose I could go on, parsing out the various groups who have been marginalized, ignored, or forced into their roles as contributors to the vast infrastructure all around us, but you get the idea. If anything, his question served to point to the work yet to be done in broadening our conversations about identity, justice and our respective places in the larger conversation.

In the Christian context, it points, I think to the miles we have yet to journey toward “Thy Kingdom Come.” Yes, we all labor. We all have our trials, and we all crave validation and recognition. But to speak of perceived dispossession from a place of such privilege (past and present) only serves to drive deeper the wedges of misunderstanding, resentment and other-ness against which we, as Kingdom-seekers, should be working toward, together.

It’s not about credit; it’s about justice. and as the poet Robert Frost said, we have miles to go before we sleep.

For part one of the story I shared at Wild Goose, click here:
Bromosapien: Evolution of the Postmodern Male (part 1)