I get why the Pope supports what many call “traditional family values.” I don’t agree, but the Catholic Church’s positions on Gay Marriage, LGBT rights and sexual identity are deeply rooted in the tradition of the institution. But while many are engaging people on both the left and right in meaningful conversation on issues like this (see Justin Lee’s Gay Christian Network and Andrew Marin’s Marin Foundation), others endeavor to squash the dialogue and further the perception that there is a war underway for the soul of the culture.

And when that message comes from the head of the Catholic Church, a sobering portion of the global population takes notice.

I’m actually friends with Andrew Marin, and he was telling me recently about an invitation he had earlier this year to speak at the Vatican to the papal leadership known as the Vatican Council. His aim was to engender a more nuanced understanding of the lives affected when divisive rhetoric is used around this issue and how we might seek to take a more Christ-like approach to the discussion going forward.

That’s what I got from his description of it anyway. Strangely, my invitation to speak to the Vatican Council must have gotten lost in the mail. Anyway…

I was encouraged by the very fact that the Vatican would invite Andrew to speak to them. That, in itself, seemed to indicate an encouraging step in the right direction. And although the Council can hardly dictate the agenda or language chosen by the Pope, I was discouraged by the profound disconnect between what this invitation seemed to suggest and what the Pope said recently to the same Vatican bureaucracy. Following is excerpted from a piece that appeared on the Huffington Post Religion section:

Benedict XVI made the comments in his annual Christmas address to the Vatican bureaucracy, one of his most important speeches of the year. He dedicated it this year to promoting traditional family values in the face of gains by same-sex marriage proponents in the U.S. and Europe and efforts to legalize gay marriage in places like France and Britain.

In his remarks, Benedict quoted the chief rabbi of France, Gilles Bernheim, in saying the campaign for granting gays the right to marry and adopt children was an “attack” on the traditional family made up of a father, mother and children.

“People dispute the idea that they have a nature, given to them by their bodily identity, that serves as a defining element of the human being,” he said. “They deny their nature and decide that it is not something previously given to them, but that they make it for themselves.”

“The manipulation of nature, which we deplore today where our environment is concerned, now becomes man’s fundamental choice where he himself is concerned,” he said.

Taking a firm stand based on one’s religious convictions is one thing, but how should anyone within the LGBT community perceive the Pope’s comments as anything less than dehumanizing? He claims that to be gay is to engage in a deplorable manipulation of human nature (as if someone would choose to be gay and willingly submit to such abuse from the 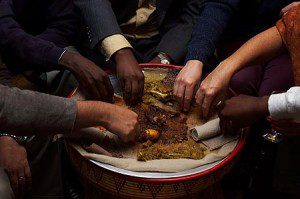 culture) and uses the faith to further justify the denial of equal rights.

While I deeply admire the work of Marin, Lee and others who maintain hope that we may add seats to the table, expanding the conversation in a way that grows God’s Kingdom beyond ideological differences and focuses, instead, on relationship, story and the love that grows from such bonds. But When someone like Pope Benedict not only refuses a seat at the table, but also scorns the very basis for the conversation (and during an address that is meant to focus on Christmas), I have little hope that we’re making significant progress in the effort to heal.

As a side note, I think it’s at least a little bit ironic that Benedict chose his Christmas address to speak in support of “traditional family values,” considering the story of Christ’s birth: a pregnant teenage girl, unmarried but engaged to a much older man. What scandal! What did their families think? What would the world think of such a “nontraditional” family being the cradle for the birth of the Messiah?

The very fact that God found a way into such a scandalous scene and imbued it with such hope, life and beauty gives me some encouragement that God will continue to work within this conversation, even as the very church claiming God’s authority seeks to tear the table apart.

December 23, 2012 Church Sign Epic Fails: "Satan's Graffiti" Edition
Recent Comments
28 Comments | Leave a Comment
"awesome."
Brandon Roberts Not “That Kind” of Christian
"nice article."
Brandon Roberts Talking Sex with Invisibilia’s Hanna Rosin
"Thanks for a fun romp. As a Presbyterian minister, I would have welcomed you gladly ..."
Zeigler John Leaving A-Holiness Behind
"Dear Sarah and Christian,I'm sorry for what has happened to you and your mother and ..."
Amazingaljicrowley3679 Letter From a “Demon Possessed” Woman
Browse Our Archives
get the latest from
Progressive Christian
Sign up for our newsletter
POPULAR AT PATHEOS Progressive Christian
1