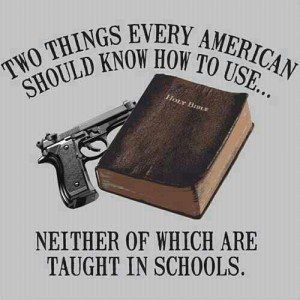 I know this sounds strange, but my feelings about guns is pretty similar to how I feel about cigarettes. On the one hand, I can’t stand either one, and I’m more than happy to see their numbers reduced in our midst. Both seem to serve a common end game, which involves death in various forms. But though I don’t like either one, the libertarian inside of me wonders how much the government really should be involved in limiting individuals’ access to either. After all, the government hardly can save us from ourselves.

And then I heard the interview last night on National Public Radio’s “All Things Considered” program with Rev. Dr. Richard Land, a minister and prominent leader within the Southern Baptist Convention. It’s rare that I can say I couldn’t believe what I was hearing, but I did have to go home and look this one up to make sure he said what I thought he said.

Land is hardly alone in being a Christian and also advocating strongly for what many call their Second Amendment right to bear arms. And for much of the interview with host Robert Siegel, I appreciated where he was coming from, even if I didn’t entirely agree with him. Land is a lifelong gun owner, though he has never joined the NRA. As a youngster, he used a gun to ward of an invader in his family’s home, and he has advocated for gun ownership ever since. He is in support of closing loopholes in the background check system, in eliminating access to high capacity clips and possibly even re-enact the ban on assault weapons.

But then toward the end of the interview, Siegel asked Land how, as a Biblical literalist, he could use the texts in the New Testament to justify the possession and use of guns against another human being:

SIEGEL: Do you have an obligation to turn the other cheek?

LAND: I think I do, personally. But the difference between personal and defending others, you know, it’s the justification that’s used for soldiers and others and police officers, and I think for private citizens as well.

If I find that someone is trying to do harm to someone else, I believe that I have a moral and Christian obligation to do what ever I can – with the least amount of violence necessary – but if necessary, lethal violence to stop them from harming others. That’s loving my neighbor as myself. That’s doing unto others as I would have them do unto me.

So basically, Land employs both the Golden Rule and Jesus’ Greatest Commandment to justify shooting someone to death if necessary, so long as there is a perceived threat against someone you consider your neighbor. But if this was the case, why is there nowhere in the Bible that Jesus endorses violence? What about when Peter cut off the ear of the centurion? Surely this would have been justified within Land’s understanding of Gospel teaching?

Taken further, Land applies this thinking to justification to everything from police deadly force to war. But if this was what Jesus meant, why did he disappoint so many who expected him to ride into Jerusalem and kick some Roman ass? Weren’t his Jewish neighbors being oppressed, even killed, by their Roman occupier? Why didn’t he lead a rebellion like the people wanted? Why submit, instead, to a humble death, striking out against no one in retaliation?

Land’s interpretation of scripture here is convenient manipulation for a personal agenda at best. And although we all engage in this to some degree, it seems that this kind of marriage of personal agendas with select Biblical passages is the very kind of thing that has justified any number of “holy wars” in the past. And really, the problem doesn’t seem to lie so much with the co-opting of the text for personal interests; rather, my greatest concern is in how Land seems to choose to limit the definition of what the word “neighbor” means.

As Jesus taught us to love our enemies, to turn the other cheek and to lay down our swords, even when faced with an imminent threat as he was, he challenges us to break our understanding of community wide open. In that moment when Jesus ordered Peter to sheath his sword, he saw Peter and his disciples as neighbors, but he also saw the soldiers themselves as neighbors. He sought forgiveness from God for his captors, even as he hung on a cross, moments from death. Why? Because they, too, were his brothers and sisters.

Such love to which we are called erases all boundaries otherwise used to justify things like deadly force, war and exploitation or oppression in its many other forms. In those scenarios, we can justify nearly anything, so long as we’re on the “right side” of the line. But once there is no line, the rules of engagement change entirely.

My hope is that Rev. Land was caught unprepared, and that he will take every opportunity available to make right the distortions he promoted in the NPR interview. It’s chilling to consider that one of america’s most powerful religious leaders would wield the Bible as a convenient weapon over the heads of others, much as he holds his gun at the ready to level at anyone posing a threat to those he cares about.

This is madness. And it has to stop. But if people of faith won’t call for the laying down of arms, who in the world ever will?

December 19, 2012
Pastor Terry Jones is No Match for the Beatles' LOVE
Next Post 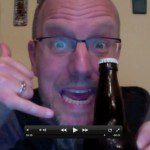