Pastor Terry Jones is No Match for the Beatles’ LOVE

Pastor Terry Jones is No Match for the Beatles’ LOVE December 19, 2012 Christian Piatt 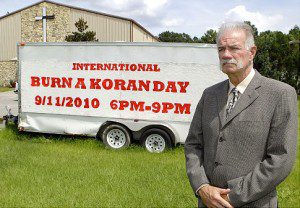 Many will remember pastor Terry Jones as the champion of the “Burn a Quran Day” event, intended to fan anti-Islamic rhetoric on the anniversary of the September 11th attacks. Though many shouted him down and criticized his motives, he continues to have somewhat of a national platform for his agenda.

In this video produced by the New York Times, we get to witness what I consider a momentary intervention of God’s spirit in a beautifully, creatively nonviolent way. As Pastor Jones condemns Muslims and their religion, a man in the crowd pulls up the lyrics to the Beatles song, “All You Need is Love” on his phone. He stands next to jones and begins to sing, inviting the crowd to join in. It is beautiful because his hate is repaid with song, and the sting of his venomous words is neutralized without a hand or another voice being raised in anger (though I could do without the “idiot” sign, thanks).

It reminds me of an experience, about which I have written before, when I attended my denomination’s international convention in Kansas City. The folks from Fred Phelps’ Westboro Baptist Church picketed the event because some of our churches affirm our LGBT sisters and brothers as leaders in ministry. As I crossed the street toward the convention center, one of the protesters got in front of me and began hurling obscenities at me, attempting to provoke me into a fight. I learned later that they have a habit of doing this so that they can turn around and sue those who physically assault them, thus funding their ministry.

A group of our high school youth decided they could not simply sit by and do nothing as people stood only yards from our church gathering with signs that read “God Hates Fags” and the like, so they came up with what I think was an inspired plan. Rather than shouting back at them or confronting the protesters on their own terms, they stood on a nearby corner and began to sing together. They sang songs like “Jesus Loves Me,” “Sanctuary,” and even a little bit of “Alfred the Alligator,” just to keep things light.

The result was that, as people walked by, they began to smile at the youths’ response rather than cringe at the protesters’ bitter invectives. They were allowed to continue their protest, but it was robbed of its power to foment more anger, violence or hatred.

It actually just started to look silly after a while.

Others passing by joined the youth in their songs and the crowd grew until, finally, the Westboro folks packed up and looked elsewhere for a more receptive audience.

People ask me sometimes what God moving through a post-Christian world looks like. Yes, our churches continue to struggle to maintain relevance, and the fastest growing demographic within religious identities is “none of the above.” And yet God insists. God continues to stir. Love emerges in response to hatred and complete strangers join together in a Whoville-like chorus of a Beatles song in the middle of Times Square.

For me, this is a glimpse of the coming Kingdom for which so many of us hope.

May the circles be unbroken
slacktivist
Related posts from Christian Piatt