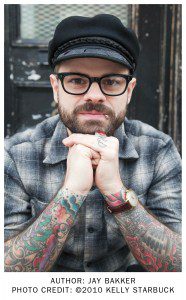 We don’t usually drink while recording the podcast since it’s usually morning. But this was late afternoon this time, so we all sipped some Great Divide Oak-Aged Yeti and some Fire Mountain Summer IPA. Things…get a little sloppy. I won’t give too much away, but some violence ensued, and it’s all captured on tape. You will not be disappointed.

Christian also had to interview Jay Bakker alone. Jay opens up about his new book, Faith, Doubt, and Other Lines I’ve Crossed, his life and evolving theology, and why Exodus International once brought him in to speak without knowing his stance on homosexuality. Jay weighs in on their recent apology before we discuss it further in the Echo Chamber.

So, yeah, we talk about about Exodus International. And then, the violence occurs in all its terrible, terrible glory.

Then, Jordan tries to explain the bizarre Twitter war waged on @ProdigalSam, a South Carolina youth pastor who drew fire from the likes of Patton Oswalt for plagiarizing tweets.

Then, to close things out, Christian and Amy talk about seeing Patty Griffin the night before, and two super-secret surprise guests stop in! (SPOILER ALERT: It’s Jordan’s wife and daughter.) 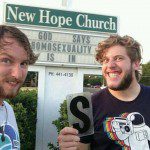