First Reading
1 Kings 21:1-10, (11-14), 15-21a
King Ahab wants Naboth’s vineyard but he won’t sell. So Jezebel, Ahab’s wife, sets Naboth up and has him killed. Elijah prophesies to Ahab that ruin will come upon him for doing this evil.

(and)
2 Samuel 11:26-12:10, 13-15
King David marries Bathsheba after sending her husband, Uriah, to die in battle. The prophet Nathan calls David on his greed and David confesses his sin. Still, his punishment is that the child borne between him and Bathsheba will die.

Gospel
Luke 7:36-8:3
Jesus is dining at Simon’s house. A “sinful woman” bathes his feet in oil and her tears. Simon is shocked that Jesus would let such a woman touch him, but he says because her sins are great, forgiveness of her sins will lead to even greater love. End of the text also names several female disciples, noting that they help subsidize the men’s ministry.

Psalm
Psalm 5:1-8
A psalm attributed to King David about how God detests wickedness. He’s asks for God’s guidance toward a righteous path.

(and)
Psalm 32
Another psalm from David about how one who does evil and does not confess their sin to God is tortured by the burden of carrying around their own guilt. He counsels the reader not to be stubborn, but to allow God to guide them to a path of peace.

Second Reading
Galatians 2:15-21
Paul reminds the early Christians in Galatia that following the law isn’t what leads to a righteous life, but rather, opening oneself up to the spirit of Christ in faith. After all, he notes, if the law could have saved us, then Jesus’ sacrifice was pointless.

Nathan – Sorry, not the guy who invented the famous Coney Island host dogs. Rather, he was a prophet to the kings during to reigns of David and Solomon. In fact, Nathan was crucial to Solomon becoming King, as he revealed a plot by Adonijah to try and usurp Solomon’s right to the throne.

Uriah – He was a soldier in David’s army. David wanted to bone his wife, Bathsheba, so he sent Uriah to the front lines of battle, where he knew he’d be killed.

Alabaster – I’ve mentioned before that very little appears in scripture by accident. In this case, the fact that the jar used to carry the oil the woman uses to wash Jesus’ feet is alabaster is super important, and worth investigating further below in the “digging deeper” section.

• Interesting that, like in the Genesis story with Adam and Eve, Ahab (though he’s a king) seems like a hapless, pouty kid who needs the woman to do his dirty work for him. Bt because he benefits from her deceit, Nathan claims that he will suffer for it. But trust me, if you haven’t already read the story of Jezebel, things don’t end well for her either.

• Even though King David confesses his sins of murder, deceit and adultery, someone still has to pay. So the newborn that is the product of Bathsheba and David’s marriage is struck ill at birth. Seems unfair, right? Then again, this is consistent with the “jealous God” portrayed in the early books of the Old Testament who levies the price of “sins of the fathers” on several subsequent generations.

• Most of the time, the only disciples mentioned are the twelve “main guys.” But in this passage from Luke, several female disciples are mentioned by name. It also points out how important they are to sustaining the disciples’ ministry. Thanks, Luke, for finally giving at least a few props to the disciplettes!

• Paul’s discussion of following our faith in Jesus over the laws of the culture or even the Bible are an important indicator of a shift away from a faith of legalism and toward something entirely new. It also is transformative of our understanding of justice: something I’ll look at in more detail later in this study… 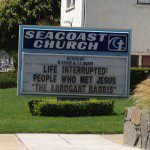