When Ministers Lose Their Faith

Following is excerpted from my recent Heretic’s Guide to the Bible, a weekly lectionary study. To read more, or to subscribe, CLICK HERE or on the banners above or below.

The pastors I know are some of the most burned out folks you’ll ever meet. They’re overworked, overtired, and it’s really no surprise to me that a significant number of them end up walking away from their calling to ministry in time, if not their faith all together.

One pastor that I know lasted only three years in his final ministerial position. In that time, he lost about forty pounds, along with his faith. When he resigned as pastor, he decided to move to Hawaii and start practicing reiki. Not that there’s anything wrong with this particular style of quasi-mystical massage, but it ain’t exactly downtown Christian church ministry.

Why is this? Aren’t our religious leaders supposed to be the ones who are faithful in spite of, well…everything? Aren’t they the ones who are supposed to help us through our hard times by leaning on their own faith and wisdom? But this is pretty much what is happening to the religious leader portrayed in Ecclesiastes. It wouldn’t surprise e to find out that, just past the end of this book, he took off for Hawaii to do reiki.

But ministers, like most everyone else, fall victim to the same kind of earthly traps as anyone else. They get preoccupied with making the budget, building an endowment, expanding the membership rolls, putting on the perfect worship service. But in the end, people come and go, they are born and die, they find faith and they lose it. Does it all really make a difference?

When Amy and I finally decided it was time to leave Pueblo, Colorado, where we plated and nurtured a new church to life for eight years, she was terrified by the prospect that it might wither and die in our absence.

And what if it does? I asked. Does that mean that the experience we had, the moments in which we felt so close to Got we could nearly taste it, were all for nothing? After all, if we measured Jesus’ ministry the way we measure most of ours, he was a total failure. There has to be more to life, it seems. And yet we’re so easily tempted back into the same old ways of thinking and acting, even in the church. 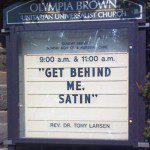 August 1, 2013 Pope Francis on Gays Reveals a House Divided
Recent Comments
8 Comments | Leave a Comment
"nice article."
Brandon Roberts Talking Sex with Invisibilia’s Hanna Rosin
"Thanks for a fun romp. As a Presbyterian minister, I would have welcomed you gladly ..."
Zeigler John Leaving A-Holiness Behind
"Dear Sarah and Christian,I'm sorry for what has happened to you and your mother and ..."
Alejandro Restrepo Letter From a “Demon Possessed” Woman
"This blog is dated March 2016. It wasn't that good then and it's no better ..."
Bob Shiloh Five Ways “Representative Democracy” is Failing ..."
Browse Our Archives
get the latest from
Progressive Christian
Sign up for our newsletter
POPULAR AT PATHEOS Progressive Christian
1