I had a series a while back about the Christian Cliches that we should drop from our lexicon, and since then I’ve had people ask what they should be saying instead. So here’s a list of handy phrases to help bring followers of Jesus into a post-Christendom, 21st-century world. 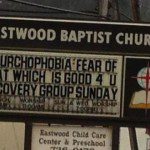 September 2, 2013 Church Sign Epic Fails, "Church Phobia" Edition
Recent Comments
45 Comments | Leave a Comment
"awesome."
Brandon Roberts Not “That Kind” of Christian
"nice article."
Brandon Roberts Talking Sex with Invisibilia’s Hanna Rosin
"Thanks for a fun romp. As a Presbyterian minister, I would have welcomed you gladly ..."
Zeigler John Leaving A-Holiness Behind
"Dear Sarah and Christian,I'm sorry for what has happened to you and your mother and ..."
Amazingaljicrowley3679 Letter From a “Demon Possessed” Woman
Browse Our Archives
get the latest from
Progressive Christian
Sign up for our newsletter
POPULAR AT PATHEOS Progressive Christian
1