I invited my readers to contribute to a list of books they felt every Christian should read. Yes, the Bible is not on here, as I felt that one was kind of obvious and goes without saying. So if you’re a Christian and haven’t read the Bible, find a good companion study guide and start there. As for what to read next, this is a pretty strong list of contenders in the top 25, though painfully heavy on male writers. For the full list of 75 or so books, CLICK HERE. And no, I did not add my own memoir to this list. Thanks to those who did add it and vote for it, though. 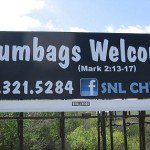 October 16, 2013 Be Annoying for God
Recent Comments
36 Comments | Leave a Comment
"awesome."
Brandon Roberts Not “That Kind” of Christian
"nice article."
Brandon Roberts Talking Sex with Invisibilia’s Hanna Rosin
"Thanks for a fun romp. As a Presbyterian minister, I would have welcomed you gladly ..."
Zeigler John Leaving A-Holiness Behind
"Dear Sarah and Christian,I'm sorry for what has happened to you and your mother and ..."
Amazingaljicrowley3679 Letter From a “Demon Possessed” Woman
Browse Our Archives
Related posts from Christian Piatt