The Gospel of “Breaking Bad”

This is part of the weekly Bible study, called A Heretic’s Guide to the Bible. To find out more, or to become a part of the conversation, CLICK HERE, or on the banners above or below.

It may seem strange to be referencing the show “Breaking Bad” in a Bible study. After all, how can we glean any sort of gospel wisdom from a methamphetamine-cooking high school teacher, turned international drug Lord?

The thing about this show is that, over five seasons, we watch what seems to be a basically good guy sitcom to small temptations and compromises that he works diligently to reconcile with whatever choices he is making at the time in his life. None of it happens overnight; it’s not like the typical “good guy gone bad” dramatic turn we see in most movies. It is subtle, gradual, incremental, and somehow there is always some sort of seemingly virtuous justification for the less than virtuous conclusions at which he arrives.

He is a dying man. He has nothing to lose. He has a responsibility to his family. Ultimately, all of this is done out of love and concern for those he cares about. And yet, we look back after five years and realize the massive carnage he has left in his wake. His friends are either dead or disappeared. His own brother-in-law was the unfortunate victim of his selfish decisions. And a very family he claimed to be the reason for all of his nefarious choices has fallen apart, turned their back on him. They are terrified of him and want nothing to do with them.

What’s more, he has even lost control of most of the money he had amassed, theoretically to care for his family. So basically all of these compromises, these minor divergences from the path of what is right in his life, have led him toward a reality that is little more than an illusion. It is lonely, isolated and without hope. It is much like I expect Timothy feels, surrounded by a broken and fractious church, or the people of Jerusalem feel under the oppressive thumb of the Babylonian empire.

We compromise so much for what we think we want, and then when we get it, so often we realize not only that it wasn’t what we wanted after all, but that the things we gave up to get their really were the things that had true value to begin with. But just like in these Bible stories, and liking our lives, there is at least a glimmer of hope for redemption in “Breaking Bad,” even for good old Walter White.

In the end, Walter is faced with an opportunity to do something truly selfless. He throws himself on top of his old friend, Jesse, saving him from a hail of bullets tearing through the house of the professional assassins in which they find themselves. Yes, Walter has done many, many bad things. He is not a good man, the ripple effects of his choices will extend outward and affect so many lives for years to come. But even in the midst of all of that darkness, hopelessness and bloodshed, and despite all of the greed and compromised morals, there was still a tiny little spark left of the heart of such a broken man.

And if, in the end, there is hope for Walter White, I have to hold out hope that there is even a chance for a guy like me. 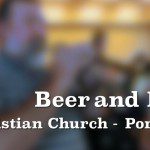 October 7, 2013 Beer and Hymns: The Video
Recent Comments
5 Comments | Leave a Comment
"nice article."
Brandon Roberts Talking Sex with Invisibilia’s Hanna Rosin
"Thanks for a fun romp. As a Presbyterian minister, I would have welcomed you gladly ..."
Zeigler John Leaving A-Holiness Behind
"Dear Sarah and Christian,I'm sorry for what has happened to you and your mother and ..."
Alejandro Restrepo Letter From a “Demon Possessed” Woman
"This blog is dated March 2016. It wasn't that good then and it's no better ..."
Bob Shiloh Five Ways “Representative Democracy” is Failing ..."
Browse Our Archives
get the latest from
Progressive Christian
Sign up for our newsletter
POPULAR AT PATHEOS Progressive Christian
1