The “Those Christians” Test

As Gandhi famously said, “I like your Christ; I do not like your Christians. They are so unlike your Christ.” See, that’s a problem. And it’s not that I expect Christians to be perfect. Far from it. But if we’re ever going to be justified in claiming Jesus as the model for our lives, it might help first if there was more of a resemblance.

So with that, I give you ten ways to tell if you are possibly one of “those Christians:”

And no, there’s no scoring key. This is not a pass/fail kind of thing. That, of course, would be a telltale “those Christians” move.

Coming up tomorrow: The Jesus Test. 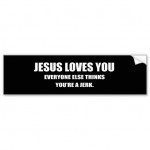 October 18, 2013 The "Jesus Test"
Recent Comments
8 Comments | Leave a Comment
"This blog is dated March 2016. It wasn't that good then and it's no better ..."
Bob Shiloh Five Ways “Representative Democracy” is Failing ..."
"sounds cool."
Brandon Roberts Untitled
"cool."
Brandon Roberts Christian Panders, Fundies for Sanders, Bible ..."
"I believe taking calculated risk are super important. having the faith that it will work ..."
Sean Lewis 25 Christian Blogs You Should Be ..."
Browse Our Archives
Follow Us!