This episode has been in the hopper for a bit, so don’t be mad at us for talking about 9/11 and flooding in Colorado.

We start things off strong with a discussion of which gender and sexual orientation is best to get compliments from, an appearance from the famous Mattias Piatt, who provides some advice on breaking arms.

Our guest this week is Amanda Bast, an extremely funny writer who’s article “26, Unmarried, and Childless” blew up Converge Magazine, garnering over a million views in four days. Amanda discusses the article, which questions our culture’s approach to constant concern over what’s next, what it’s like to have a blog post go extremely viral, and what it’s like to be a young teacher in Ontario, Canada.

In the Echo Chamber, we reflect on 9/11, and specifically the overreaction and fear the attacks engender in Americans 13 years later. Then I ranted about how Americans should be brave.

In a change of pace, Christian takes this week’s Fear o’ the Week, and he’s scared of spider season. Especially the succulent ones. Then, the gang recommends some books, particularly Nadia Bolz-Weber’s bestselling Pastrix, and 1491, a book about the Americas before Columbus landed that will blow your mind and change everything you know about the people who lived here before white folks showed up and accidentally killed nearly all of them.

October 4, 2013
What is the CANA Initiative? An Interview with McLaren, Spellers and Pagitt
Next Post 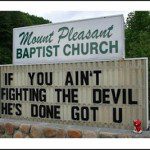 The pellet with the poison's in the vessel...
Here's your open thread for January 18, 2020. Talk amongst yourselves.
view all Progressive Christian blogs
What Are Your Thoughts?leave a comment
Copyright 2008-2017, Patheos. All rights reserved.