Having the Faith to Fail

Having the Faith to Fail November 6, 2013 Christian Piatt

The following is excerpted from my weekly Heretic’s Guide to the Bible study. To read more, or to take part in the study, CLICK HERE or on the banners above or below.

Apple’s cofounder Steve Jobs was, by all accounts, a tremendous success in the fields of technology, design and business. He was meticulous, a perfectionist and so obsessed about the quality of his work that some found him fairly impossible to work for. But what some people don’t realize is that Steve Jobs failed far more often than he ever succeeded.

For starters, Steve Jobs was a college dropout. He only made it through one semester or so of classes before calling it quits. Interestingly, he is in good company, as Microsoft founder Bill Gates and Facebook creator Mark Zuckerberg both dropped out as well.

And although he finished strong with Apple, let’s not forget that he was fired by the very company he helped create. And after being let go by Apple, Jobs started a new company that, by all accounts, was a spectacular failure.

Even Apple, the modern-day picture of technological success, and one of the most valuable and successful companies in the history of the world, has had far more products fail that it has had successes.

When asked about his many challenges and struggles, and how he managed to prevail and succeed anyway, Jobs was very matter-of-fact. In the end, he didn’t feel that he had any greater capacity for success than anyone else. But what he did have was a high tolerance for failure. He was willing to fail often enough and terribly enough, and yet keep going because he believed in what he was doing and who he was.

Now just imagine if Steve Jobs had been in charge of the reconstruction of the Temple in Jerusalem. Do you think everyone would have been reading the Torah from iPads? 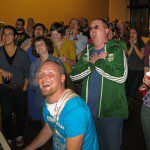 November 4, 2013
Beer and Hymns on NPR's Weekend Edition
Next Post 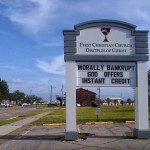