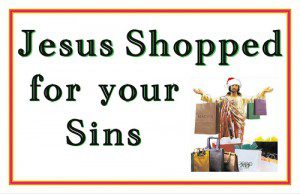 We’ve created a Christmas monster: a grotesque assemblage of pagan, Christian and capitalist symbolism into something that resembles something we’re both attracted to and repulsed by at the same time. We’re fueled by an admixture of both guilt and greed, while the domestic economy pins its annual hopes on our propensity for spending far more than we have or want to spend.

All in the name of baby Jesus.

It seems that we have no means of escaping the vortex of materialism, partly because whoever is the first not to buy gifts is the cheap bastard who throws the whole transactional nature of gift-giving out of whack. But one Christmas, a few years back, my wife Amy and I had finally reached our limit. We were in the midst of our Financial Peace budget slim-down and Christmas spending was an obvious target.

Our saving grace came in the form of a book called The Hundred Dollar Holiday by Bill McKibben. There were lots of great ideas in the short volume, but the one that stuck with us was the idea to make something for folks that was unique and really featured the character of your family. That’s when we did our very first Christmas family movie:

It’s not always been easy to live up to that first video, but it was CHEAP. We made that with a Flip cam and edited it on my laptop. And people are still talking about it, years later. And honestly, I couldn’t tell you many, if any, gifts I got three years ago if you had a gun to my head.

So here’s my list of suggestions to de-capitalize your Christmas experience.

1. Make something – I used to be intimidated by artistic friends who made amazing gifts until I realized that, just like with kids, what people want is something really from your heart. If you bake, do it with love and think of the people you’re giving it too. But whatever you do, do it joyfully and put yourself into it. Make it authentic rather than perfect.

2. Prepare your kids – It’s easy to criticize how needy and greedy kids get around Christmas, but it’s the adults who make them that way. Yes, the ads are ubiquitous, but we can turn off the television. And if we explain ahead of time to our kids that we’re only giving them each three things, or that the budget is X-Y-Z amount, they have to think more carefully about what they really want. Oh, and we also enjoy the practice of going through our old toys with the kids and giving away as many things to charity as they get.

3. Give Your Time – If you know young parents, give them a date night by watching their kids. Family friends can be invited over for a special gourmet meal, or to go on a special outing together. Shared experiences go a lot further in our emotional memories than stuff anyway.

4. Make a pact with your spouse/partner – This was tough for me, because giving gifts within my family of birth was how we showed love. But no matter what you do, it ends up feeling kind of obligatory and transactional at Christmas. So Amy and I agree not to get ANYTHING for each other at Christmas. Instead, we buy little gifts or try to do special little things for each other at unexpected times throughout the year. It’s way more fun to get something when you had no expectations that to get a bunch of things all at once while you’re still fretting over how to pay for the crap you bought everyone else.

5.Buy Local/Original/Independent – Yeah, I know, this sounds dumb coming from a guy who sells books through Amazon, but if you’re going to cave in and buy stuff for Christmas anyway, at least make it something people can’t find anywhere else. Websites like 10,000 Villages offer cool handmade items that offer living wages to the artisans. And there are tons of starving artists, craftspeople and artisans in every community who would kill to have 5% of the revenue their local department store gets. Gift giving is the perfect opportunity to put our money where our mouths are, by supporting what we say is important during the rest of the year.

None of this is earth-shattering stuff, but I find it’s helpful reminder once in a while that you don’t have to drink the proverbial Kool Aid and spend yourself into debt for it to be a Merry Christmas. As you wean yourself from the spending frenzy, you’ll create space for new experiences, new traditions and new priorities to enter into that space. And trust me; there’s nothing like checking your bank statement at the beginning of the year and not having to scramble to cover the checks you’ve written buying who-knows-what for -who-knows-who.

Do it for baby Jesus 🙂 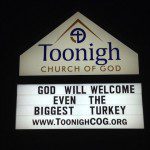 December 19, 2013 The NSA's Need to Know, Your Privacy and Jesus' Path
Recent Comments
1 Comment | Leave a Comment
"This blog is dated March 2016. It wasn't that good then and it's no better ..."
Bob Shiloh Five Ways “Representative Democracy” is Failing ..."
"sounds cool."
Brandon Roberts Untitled
"cool."
Brandon Roberts Christian Panders, Fundies for Sanders, Bible ..."
"I believe taking calculated risk are super important. having the faith that it will work ..."
Sean Lewis 25 Christian Blogs You Should Be ..."
Browse Our Archives
Follow Us!