Most people haven’t heard of “Legislative Theater,” thought it’s been around for about fifty years. The idea is to use the arts – and more specifically, theatrical productions – to affect social and political change in a specific, concrete way.

And although the concept was born in South America, Pedro Reyes has brought it to the United States. In a recent National Public Radio story, he explains how the concept came to be a reality. It began seven years ago when Culiacan, a city in Mexico, collected more than 1,500 guns in an effort to curb violence on the streets.

Reyes and his cohorts then took the guns, melted them down and turned them into shovels. Then, each of the 1,500-plus new shovels was used to plant a tree. But Reyes was inspired to do more. Specifically, he felt compelled to help inform the United States citizenry and political powers that be of their impact on Mexican life.

As he describes in the NPR story, living south of the border is not unlike having an upstairs neighbor with a leaky roof. “Just what is leaking is hundreds of thousands of guns,” he says.

This is an exclusive for Sojourners. Read my full article and watch an accompanying video HERE. 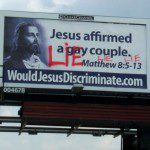 February 3, 2014 Church Sign Epic Fails, "Lie, Lie Lie" Edition
Recent Comments
0 | Leave a Comment
"I believe taking calculated risk are super important. having the faith that it will work ..."
Sean Lewis 25 Christian Blogs You Should Be ..."
"Indeed it is a nice blog , here we represent Award9ja.com"
herald nigeria 25 Christian Blogs You Should Be ..."
"good article."
Brandon Roberts Religious Haters, Stunned Red-Staters and Pop ..."
"goodness, some pple shld just learn not to speak at all"
Xu Hongming Ten Cliches Christians Should Never Use
Browse Our Archives
Follow Us!

If You Think Trump Was Picked...
The Official Blog of Benjamin L. Corey
Related posts from Christian Piatt