The Legacy of Fred Phelps

I suppose it is an indication of how steeped in popular culture I am that the first thing that came to mind when I heard of the death of Westboro Baptist Church founder and former leader Fred Phelps was the song, “Freddie’s Dead,” by Curtis Mayfield. But although it is a relatively superficial and tangential connection to make, I still prefer that to much of the venom and grave dancing have witnessed since the announcement.

Phelps and his predominantly family-based ministry is best known for their over-the-top protests of everything from gay pride festivals to military funerals, as well as their deeply divisive and inflammatory signs. But given the fact that only a relative handful of people attend Westboro Baptist, and given the extreme nature of their mission and message, Phelps’s ability to galvanize and garner the attention of the mainstream media was nothing short of remarkable.

It is less well known that Fred Phelps was kicked out of his own congregation in recent years as the beast of intolerance he had given birth to within his congregation turned even on him. Apparently, even Phelps himself had lost the necessary edge of judgment, anger, and intolerance his followers deemed necessary to champion their cause going forward. 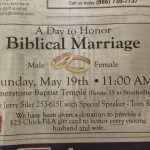 March 27, 2014 5 Reasons You Need a Female Pastor
Recent Comments
0 | Leave a Comment
"I believe taking calculated risk are super important. having the faith that it will work ..."
Sean Lewis 25 Christian Blogs You Should Be ..."
"Indeed it is a nice blog , here we represent Award9ja.com"
herald nigeria 25 Christian Blogs You Should Be ..."
"good article."
Brandon Roberts Religious Haters, Stunned Red-Staters and Pop ..."
"goodness, some pple shld just learn not to speak at all"
Xu Hongming Ten Cliches Christians Should Never Use
Browse Our Archives
Follow Us!