Sneaky Televangelists, Fred Phelps is Dead, and a Glut of God Flicks

This week we are honored to have NPR Religion Correspondent John Burnett return to the show to talk about his investigative series on televangelists and fiscal transparency: Can a Television Network be a Church? The IRS Says Yes. You may remember that John first appeared on the Culture Cast last year when he was in Portland covering Beer and Hymns. Andy talks about his detox diet, having to pee all the time, and calls for a ban on the phrase “whole ‘nother” (because “‘nother” is NOT a word!). Christian, who isn’t detoxing, reveals his surprising organ failure contingency plan.

Amy steers this week’s Echo Chamber discussion on the death of Fred Phelps, which leads into a discussion on statements of faith and whether or not they are freeing or constricting. She then delves into a real stomach-turning fear of the week after she finds out that her favorite gum contains boiled bones and animal skin.

And God, there are a lot of God movies out. The crew struggles with which of them (if any) to recommend. Jess the Intern reviews “God Is Not Dead” and Christian hopes beyond hope that Darren Aronofsky’s “Noah” will deliver.

Listen if you dare. or Subscribe to our show or others in the Homebrewed family below.

This post is sponsored in part by Phillips Theological Seminary in Tulsa, OK. Phillips exists to cultivate vital communities, vital conversations, and the public good. April 2, 2014
Daystar's Day of Reckoning: My Interview with NPR's John Burnett
Next Post 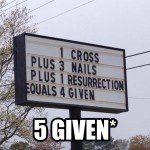