Protect Your Daughters; Turn Them Into Corporations

It’s been suggested that the recent Supreme Court decision involving Hobby Lobby’s resistance to provide insurance coverage for particular types of birth control is a blow to women’s rights. But if we’re willing to think creatively, not unlike writer and satirist Jonathan Swift, SCOTUS may have unknowingly offered us a loophole.

The recent Supreme Court ruling that allows “closely held” family corporations to decide what kinds of care they will and won’t cover, based on their religious beliefs was a great disappointment for many women’s groups and others concerned about gender parity and health care access. The thinking, according to some analysts, is that by keeping the definition of the types of businesses allowed to restrict health care services fairly specifically narrow, it would address this single case, while not setting precedent for millions of others to follow suit.

Never mind that there are more than 5.5 million companies that qualify as “family businesses” in the United States.

Never mind that all of the justices voting in favor of Hobby Lobby were men.

Never mind that all three women on the Supreme Court voted against it.

And never mind that the CEO of Hobby Lobby, David Green, is a man.

Rest assured, we’re told, that this is not a blow to women’s rights.

It seems that, more and more, corporations not only have the same rights as private citizens (see “Citizens United v. Federal Election Commission,” et al); they also can, in some cases, exercise more personal autonomy than the people – or at least the women – who work for them.

And then, after seeing an offhand comment on facebook from my friend, Josh, it occurred to me: all we have to do is turn our daughters into closely held family corporations.

Instead of my five-year-old daughter being known from here, forward as Zoe, she’ll undergo a bit of rebranding, henceforth known as “Zoe Piatt, L.L.C.” The process is pretty easy, actually, and it only costs a few dollars. Whenever I give her allowance or offer her gifts on her birthday or Christmas, they’ll enjoy the shelter of the L.L.C., which means if she’s ever sued, her assets will be sheltered.

If she wants to go to college, she can just issue a business plan, projecting her future earnings, and do an Initial Public Offering.  Then I can spend all this money I keep saving in the kid’s rainy day account on that Tesla I’ve had my eye on.

I know, it might seem like this new arrangement might compromise her ability to get a job later. Who, after all, would hire a corporation, rather than a person, right? But with more and more jobs going contract so companies can avoid offering benefits at all, it just makes sense. Run the contract through the L.L.C. and she’s golden.

Plus, on the off chance that she negotiates health care or other benefits as part of her labor contract with her fellow corporation, she’ll have just as many rights as they do. With that simple L.L.C. registration, I’ve finally put her on equal footing with her capitalist counterparts.

Yes, this Swiftian proposal is satire, but only because it almost makes sense. But in a culture where we value the sovereignty of our corporate machinery over the rights of its labor force, and perhaps worse, when five men in robes and one man behind a CEO desk can arbitrate how the rights over women’s bodies will be handled, we have to start getting creative.

So get back so me soon and invest while you can in this soon-to-be hot commodity known as Zoe Piatt, L.L.C. Once she splits, she’ll be a presence in corporate America that will make David Green blush.

July 1, 2014
The Holy Common Ground of Wild Goose
Next Post 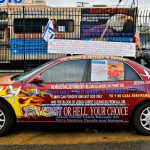 July 6, 2014 Church Sign Epic Fails, "Race Car to Hell" Edition
Recent Comments
30 Comments | Leave a Comment
"This blog is dated March 2016. It wasn't that good then and it's no better ..."
Bob Shiloh Five Ways “Representative Democracy” is Failing ..."
"sounds cool."
Brandon Roberts Untitled
"cool."
Brandon Roberts Christian Panders, Fundies for Sanders, Bible ..."
"I believe taking calculated risk are super important. having the faith that it will work ..."
Sean Lewis 25 Christian Blogs You Should Be ..."
Browse Our Archives
Follow Us!