Will the Real Jesus Please Stand Up?

Will the Real Jesus Please Stand Up? July 12, 2014 Christian Piatt 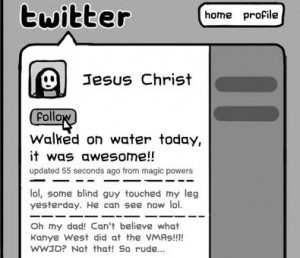 Jesus talks to me, pretty much every day.

No, I don’t mean he speaks to me while I’m in the throes of prayer or comes to me in my dreams. He actually talks to me through twitter. A lot. And he’s pretty weird.

Yesterday he told me that the Shroud of Turin was his photograph. I’m starting to think this Jesus is a little bit…off.

We have no shortage of messiahs among us, it seems. From David Koresh types who steer their cult followers toward an untimely death to self-proclaimed Twitter messiahs, there are always plenty of folks claiming to be the embodiment of the Christian second coming.

I wonder if Jesus had any idea what a great setup for nut jobs he was leaving behind when he said he’d come back some day.

It got me to wondering why so many people feel compelled to claim they’re the incarnation of Christ, come back to earth. While I’d like to think it’s a desperate attempt to bring hope to a hurting world, I’m afraid it has more to do with narcissistic delusions than any sort of altruistic intention. It seems there is nothing we won’t do to get our fifteen minutes of attention in this world obsessed with fame, from letting a cage fighter kick us in the nuts on TV to claiming we’re the resurrected Son of Man, we know it takes a lot to command the spotlight nowadays.

How would we know? What would he (or maybe she) look like? How would they act in today’s culture? Would they use social media to networks with their peeps (more the Gospel of John style Jesus), or would they go old school (a la the Jesus in the Gospel of Mark) and wait quietly and patiently for people to figure out for themselves who he was and what he was about?

And how would we treat him? What if she performed a same sex union, ate at a Chik-fil-a, voted libertarian or liked (shudder) Carly Rae Jepsen? What if he never went to church? Or if she had a family and kids? What if he cut through all the self-protecting, self-justifying B.S. we use to go about our lives as usual, revealing what the true costs of our life choices were for others and the planet?

Maybe my Twitter Jesus is the real deal. Maybe he really has become as fixated on public image as the rest of us. In some ways, it would be comforting, wouldn’t it? At least I, and the rest of us, would be in good company. 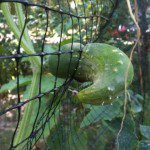 God Said It, I Believe It,...
Freelance Christianity
Related posts from Christian Piatt