Anyone who reads my stuff with some regularity probably already knows that Mars Hill pastor Mark Driscoll isn’t exactly on my speed dial list, and I’m probably not in his. From his misogynistic quips to his hellfire hyper-Calvinist rants, he and I see almost all social and theological issues as differently as two people could and still call themselves Christians.

Add to that the recent plagiarism scandal, compounded by the fact that he effectively bought his way onto the New York Times bestseller list (and it turns out he may have used church money to do it), and I question the man’s fitness for ministry.

Having said that, I actually kind of love the guy, and you do too if you’re being honest. No, I don’t mean in the “I love him because Jesus said I have to” kind of way. I mean you really kind of have a thing for him. Here’s why:

He helps us define who we are. We progressive Christians are notoriously deficient when it comes to staking a claim on what we believe, why we believe it, and how it affects our daily living. Too often, we fall back on the far easier habit of defining ourselves by what we’re not, which is why Mark Driscoll is so incredibly valuable. Every time he grabs another headline for his mind-blowing antics, we’re quick to say, “See that guy? I’m not like him.” This allows us to serve the role as some kind of ‘Christian alternative’ without actually asking ourselves the hard questions.

He distracts us from working on ourselves. Yeah, I’ve read the whole logs-and-splinters scripture, which tells us not to focus so much on the screw-ups of the person next to us when we have plenty of work to do on our won side of the fence. But damn it if it isn’t so much more fun to crap on Driscoll’s parade than to get the pooper scooper out and go about the laborious task of cleaning up our own messes.

It also keeps us from having to really do the soul-crunching work of truly loving our enemies. As I write in my new book, “postChristian: What’s left? Can we fix it? Do we care?” The gospel we’re called to live out is one of liberation, not victory. Though we might like to portray Driscoll as the lions while we embrace the role of lambs, the Christian vision for humanity is one in which the lion and lamb have to find peaceable ways to coexist. It may sound good at first, but the fact of the matter is that liberation is a whole lot harder to live for than victory.

He gives us causes to rally around. Speaking out against woman-bashing or calling for a more tolerant understanding of salvation and God’s grace is easy when the frame of reference against which we’re defining ourselves is so extreme. We know that, if we bring up things like LGBT equality or immigration reform in church we may not get very far, but we can probably get everyone around us to agree that driving a minivan doesn’t make men less godly, and that women holding jobs is no longer that shocking in the twenty-first century. So Driscoll saves us the heavy lifting of taking on the tougher issues, while feeling good about what we actually are speaking out in support of.

He serves as a common enemy. Protestants in particular are a fractious lot. My research for ‘postChristian’ suggested that there are somewhere around 34,000 different Christian denominations worldwide. We have more splits than the US Olympic gymnastic team, and even within individual congregations, there’s plenty to fight about. I’ve seriously been witness to a near church-splitting argument about the color of new carpet. Another friend told me yesterday that her church is still reeling, months after the monumental decision to change the worship time by five minutes was implemented. But a common enemy makes for convenient partnerships, and Driscoll offers this up in spades. Yes, we may haggle over grape juice versus wine at communion or what pronouns to use for God, but we can all join arms in opposition to Pastor Mark.

His shortcomings are obvious. I had a guy tell me recently that I was a good man. And it felt good…for about three seconds. Then the voice in my head started in with “If he only knew…” We all have parts of ourselves that we’d rather keep to ourselves. Sometimes, we bury the stuff so far down that we try to even forget it’s a part of who we are. The ugly, dark, naughty bits. The stuff we only do when no one else is looking. So when we see someone like Driscoll, whose foibles, missteps and rhetorical pyrotechnics are on display for the world to critique, it offers us some small comfort that at least we’re doing a better job at keeping up appearances than he is, and it also affords us a bit of relief that at least we’re not him. 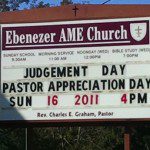 August 8, 2014 Homebrewed Wet & Wild at the Goose
Recent Comments
10 Comments | Leave a Comment
"awesome."
Brandon Roberts Not “That Kind” of Christian
"nice article."
Brandon Roberts Talking Sex with Invisibilia’s Hanna Rosin
"Thanks for a fun romp. As a Presbyterian minister, I would have welcomed you gladly ..."
Zeigler John Leaving A-Holiness Behind
"Dear Sarah and Christian,I'm sorry for what has happened to you and your mother and ..."
Amazingaljicrowley3679 Letter From a “Demon Possessed” Woman
Browse Our Archives
get the latest from
Progressive Christian
Sign up for our newsletter
POPULAR AT PATHEOS Progressive Christian
1

The Freedom to Harm is Not...
Divergence
Related posts from Christian Piatt