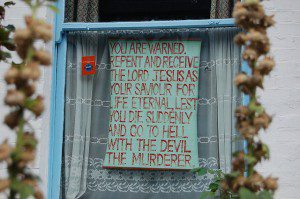 We’ve all heard the sidewalk preachers and TV Evangelists quoting the Gospels, telling us to “repent, for the Kingdom of God is at hand!” It’s a claim that is generally intended to strike fear and trembling in the hearts of many. We’re supposed to straighten up, do right, and atone for all of our heinous, sinful ways.

If you went to my kind of church growing up, there wasn’t a sermon that went by that you didn’t hear the pastor say something like, “the end could be today, tomorrow or next week. So you’d better beg for forgiveness, get right with the Lord, or risk getting ‘left behind.'”

It’s not unlike a mother’s warning to make sure, if you ever get into some horrendous car accident, to make sure you have on clean underwear.

The season of Lent is a time of reflection and repentance, yes. But we’ve come to misunderstand both what it means to repent, and what Jesus is talking about when he foretells of God’s coming Kingdom.

As for the latter, Jesus preached to some degree about the afterlife, yes. But his Kingdom-talk primarily was focused on us, on receiving and co-creating God’s Kingdom vision for ALL of us, here and now, in our very midst. So rather than talking about some hellfire apocalyptic end-times, he’s urging us to open our eyes, to see what’s right in front of us:

We can have what he, what God, long for us. To live in a world inspired and living into the Kingdom possibilities just there, nearly within our reach if we’ll only claim it and risk everything to fulfill it.

Second, repentance is another one of those great words we’ve made ugly by co-opting as a tool for fear-mongering and intimidation. To repent actually means to “turn around.” It’s about reorienting one’s perspective, one’s way of looking at all of creation and one another. It’s about living into a reality moved by compassion and unconditional love, rather than one fueled by relentless desire.

It making the shift, in turning around toward this orientation of love – this practice of “orthopathy,” I wrote about in my last post, we find the Kingdom of God right there, in the palm of our hands.

It takes practice, mindfulness, a radical shift in worldly thinking and practice. But in this forty or so days leading up to the culmination of Lent, it’s a practice worth taking on, however you engage it.

Repent, for the Kingdom of God is at hand. 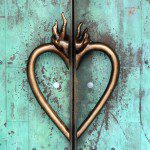 February 23, 2015
What if Following Jesus isn't Primarily about Beliefs or Actions?
Next Post 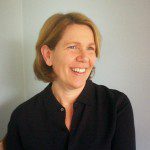 You must remember this
slacktivist
Related posts from Christian Piatt