The Gospel of Mark as a Manifesto of Political and Religious Defiance February 14, 2015 Christian Piatt 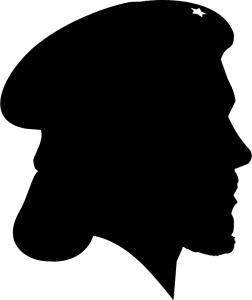 I’m starting to think that Che Guevara and the Jesus of the Gospel according to Mark have an awful lot in common.

I should explain, first, that I’m in the first month of My Jesus Project, a year-long effort to more deeply live into the life, teaching and example of Jesus through prayer, study and action. Each month, I explore a new dimension of Jesus with a mentor; this month is Jesus the Radical with Christian Anarchist Mark Van Steenwyk. So of course coming from this point of view is going to impact my reading of the Gospel According to Mark (my Gospel for the entire month). It supposed to.

But in my 43 years of being exposed to the Bible, never have I seen the Jesus of Mark in the way I’m starting to see him now.

There are two recurring themes throughout the first several chapters in Mark: crowds and healing. The crowds following Jesus represent his growing power and influence (a growing threat to the occupying authorities of the Roman Republic), and though there are many general accounts of healing, the ones explicitly detailed in Mark all point to some act of political or religious defiance in the midst of the miraculous act of compassionate healing.

He’s either claiming the authority to forgive sins in front of religious leaders, healing on the sabbath, coming in contact with “unclean” women (the bleeding woman in chapter five) without undergoing a cleansing mikvah  ritual immediately afterward, or he’s touching dead bodies (also in chapter 5) without cleansing himself as well. So far, throughout the first half of Mark, every account of healing or forgiveness stands in direct defiance of some political or religious rule.

All human laws bow at the feet of the authority of God, which is not a rule of law, but rather a subversive, paradigm-shifting “from the bottom, up” rule of love and compassion for others, first and foremost. Period.

And then, in chapter five again, Mark seems almost to be speaking in code to his Jewish brothers and sisters. When he confronts the demon-possessed man in the graveyard – a madman who no one has been able to confine – and he asks the name of the evil spirits within him, the response is, “We are Legion.” Not coincidentally, the original word translated as “Legion” is the same word the Jewish people used to describe the Roman occupying forces (another evil presence they had yet to find a way to control or contain). And Jesus, the liberator, casts Legion out of the man and into a herd of gentile pigs, which were considered to be utterly unclean by Jewish culture. In addition to being considered dirty, there’s an implication that even the pigs can’t stand Legion.

So ultimately, Legion destroys itself under the weight of its own evil.

So in each case, Jesus is the messiah that liberates God’s people: from oppression, from the rule of law that systematically wreaks violence on the marginalized, from religious leadership and ideology that exert power over their faithful to force them into conformity. So what does the kingdom of God look like in this case?

It’s messy, down in the stink and dirt of life, where the greatest need for – and therefore the possibility of – liberating, earth-rupturing grace is born. And sometimes it looks like a herd of crazed pigs running off a cliff.

What’s both terrifying and exciting is that the liberating grace doesn’t necessarily reside in the miraculous acts of Jesus. It doesn’t take supernatural powers to have the courage, vision, conviction and compassion to confront evil in all its forms in the world and to help free one another from the power we give it over us. That’s exciting because it means, like Jesus says, we can continue the work he started.

Christian Piatt is a blogger at Patheos, is the author of postChristian, Blood Doctrine and the Banned Questions book series, among others. He is engaged in a year-long effort, called My Jesus Project, to more deeply and honestly follow the life, teaching and example of Jesus through prayer, study and action. Follow along his journey, and even join in, at www.MyJesusProject.com.

February 12, 2015
We can’t allow Craig Hicks to be a scapegoat: Reflections about the Chapel Hill shooting
Next Post