(Join Christian in his year-long quest to better understand what we mean when we claim to follow Jesus at http://www.myjesusproject.com/. 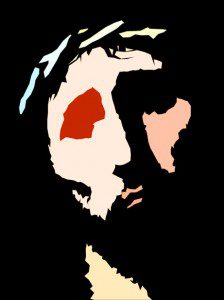 Have we made God into a monster? And as a result, have we taken the holiest of weeks in the Christian year and dressed it up as a celebration of bloody, violent sacrifice?

If so, I’m afraid we’ve gotten Easter all wrong.

I lead a small group discussion every Sunday morning at First Christian Church, Portland, where my wife, Amy is the senior pastor. It’s one of my favorite hours of the week, partly because of the common bonds of trust we’re building that transcend our many differences. But it’s also become a very safe place to ask hard, disturbing questions and to express ideas that, in many other contexts, might be shouted down or even excluded entirely from the conversation.

This week, we were discussing whether one could identify as Christian, in that they follow the example and teaching of Jesus, while also claiming no belief in any sort of metaphysical divinity (i.e.: God). Heath raised something very thought-provoking, particularly given the context of Holy Week and what it means to so many.

“If we are to believe that God sent Jesus to die for our sins,” said Heath, “it’s easy to understand why so many would want to distance themselves from such a monstrous God.” That led to a lively discussion about what Easter – and more specifically, Good Friday (when Jesus died by crucifixion) – meant to each of us, and how that understanding informed our understanding of the nature of God.

If God sent his only son first and foremost to die for our sins, then the climax of the Gospel narrative at Easter is the defining point at which we are left with what Heath called “Fifty Shades of God.”

Here we are left with what I call the conundrum of substitutionary atonement, which is the belief that Jesus took our place on the cross – deserved by us, not him – in order to satisfy the price someone had to pay for our sins. And although many who call themselves Christians claim this belief, it raises some hard questions we tend to overlook when embracing such a claim.

One reasoning I’ve heard for why this had to happen is that God cannot tolerate sin, so the atonement – the making right – for that intolerable part of our nature was only redeemed by the sacrifice of someone perfect (Jesus). But if we look throughout the Gospels, Jesus is surrounded by sinners. And never once does he run away with his hands over his eyes, yelling, “Ack, sin! I’m not listening, I’m not listening!!!” Rather, he faced them, forgave them, loved and even served them. Furthermore, he charged those who followed him to go and do the same, including forgiving sins.

So if simple human beings under the charge of Jesus could perform such acts of forgiveness, why not God? And if we think of Jesus as divine (a concept only fully introduced in the Gospel of John, which is the last Gospel to be written and embraced by Christianity centuries later), why can’t God forgive sin without taking on human form? Is it a matter of volume?

Imagine God, donning one of those green accountant visors, shaking his head and sighing in this office chair. “You know, guys,” says God, “I can take on your problems one at a time, but this debt-collection thing is just getting out of hand. Why don’t we just kill an innocent man and call it even. Deal?”

If God can’t forgive sin without a human sacrifice, then God apparently lacks the omnipotence so many claim is inherent in the nature of God.

If, on the other hand, God won’t forgive sin without Jesus’ death to make it right, then God becomes a bloodthirsty monster.

Or perhaps this is another case of us making God into our own image. After all, we love the notion of “eye for eye, tooth for tooth,” even if Jesus reframed that notion from the Hebrew texts in a radically nonviolent way. It permeates our cultural narrative in all forms of media. But the claim made by Jesus, and reaffirmed by theologians like the late Walter Wink, is this:

Violence never, ever redeems anything. It is only love that redeems.

When we’re reluctant to let go of our narrative of substitutionary atonement, we suggest that sending Jesus as a perfect sacrifice was, in fact, the ultimate act of love. But again, this is only loving if one of our assumptions above is true: that God either can’t or won’t forgive sin without sacrifice. And really, Jesus not only rhetorically challenged substitutionary atonement; he took it head-on by driving the moneychangers out of the temple, where they were selling sacrificial animals to the Jewish people on pilgrimage.

Finally, what do we make of free will, a notion fairly central to many Christians? Does Jesus’ death on the cross forgive all peoples’ sin, whether they asked for forgiveness or not? If yes, then we have no agency or free will in the matter, and all acts of forgiveness ever offered before the death of Jesus were empty gestures, or worse, abject deceit. If no, then what the hell was the point? After all, we’re still told that God forgives us only when we ask for it.

Yes, Paul talked of Jesus’ death in terms of sacrificial atonement, but we must also consider this is the Roman culture he came from. In order to purify themselves, Roman leaders would literally be washed in the blood of an animal, like an ox or a lamb. This wiped the so-called slate clean, so in taking on such thinking or wording, Paul was speaking the language of his culture. In essence, he was calling for an end to such sacrifices, claiming that, when Jesus said from the cross, “It is finished,” it wasn’t just the end of his life; it was the end of all unnecessary cycles of violence that led us no closer to God.

This Holy Week, consider Good Friday and Easter in new ways. Perhaps Jesus died because of our sinful nature, but not for our sins. Maybe it was because, when confronted with the unvarnished truth about how completely his message, taken truly to heart, would change us individually and collectively, our natural response was, “Get rid of it. Kill it. I can’t imagine letting go of everything for such a reality.”

And maybe, every Easter instead of taking the opportunity once again to take the Gospel to the innermost parts of our being and letting go of the lies the world tells us (violence is redemptive, things can make you happy, simply claim these beliefs and you’re safe), we kill him all over again. Then breathe a sigh of relief when we’re reassured, year after year, that God’s love is bigger and farther reaching than the sum total of our fears and proclivities to default to violence.

Maybe someday we’ll come to terms with the simple – and yet hardly easy – acceptance that God is Love, and Love doesn’t kill. May it be so. Peace this Holy Week. 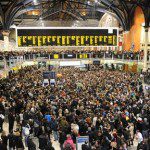 March 24, 2015
Why Pop-Up Church for Good Friday is Brilliant
Next Post

April 1, 2015 Interviewing Haaz Sleiman: Muslim Star of “Killing Jesus”
Recent Comments
8 Comments | Leave a Comment
"awesome."
Brandon Roberts Not “That Kind” of Christian
"nice article."
Brandon Roberts Talking Sex with Invisibilia’s Hanna Rosin
"Thanks for a fun romp. As a Presbyterian minister, I would have welcomed you gladly ..."
Zeigler John Leaving A-Holiness Behind
"Dear Sarah and Christian,I'm sorry for what has happened to you and your mother and ..."
Amazingaljicrowley3679 Letter From a “Demon Possessed” Woman
Browse Our Archives
get the latest from
Progressive Christian
Sign up for our newsletter
POPULAR AT PATHEOS Progressive Christian
1

What if life wasn't just a...
slacktivist
Related posts from Christian Piatt