An Opportunity for Grace in the Face of Hateful Protest

There’s little in this world that gets me going more aggressively and quickly in life than someone yelling at or denigrating my wife. Yesterday, a pair of fire-breathing evangelists did both.

Fortunately, my wife isn’t me. I was down the street preparing for a lecture I was doing this week. Rather than taking their emotional bait, she responds with the kind of grace that changes things.

I’m good at writing about how we change the world a gesture, a relationship, a word at a time. But she’s actually a hell of a lot better at doing it. Maybe she should be writing “Not That Kind of Christian” instead of me.

Just before worship yesterday, Amy was called out front to help deal with a handful of protesters who move around town, shouting fairly familiar venom either in front of topless bars or churches they deem to be deficient in meeting their understanding of the mandates of scripture. I encountered these same guys (along with dozens of their friends) at the Gay Pride parade, in which we marched as a church. They called us sodomites and shouted that we were taking our faithful to hell with our false teachings.

For me, this taps old baggage, as I was told as much at age seventeen when I had a bible thrown at my head by my youth minister and was less-then-graciously invited not to return to church. I was worse than an atheist, I heard, because my doubts and questions within a Christian community put my own friends’ souls at risk.

So I’ll admit I have a fairly visible target on my back when it comes to folks like this. And during the parade I walked over n front of their megaphones (and in front of my kids, I might add) and said, “We love you, even when you’re an asshole!” My response got some cheers and suffice it to say I felt better, at least in the moment. And I did feel like they were assholes; probably still are assholes in most peoples’ book.

But that’s not really the point. The thing is, I missed a real opportunity. No, there’s probably nothing I could have said or done to get those guys to calm down, apologize and march alongside us. But I did have an opportunity to model some real strength and grace to others there by responding without the barbs. We all knew they were being assholes, and it’s not like anyone was better for it when I named it.  it’s kind of a straw man at that point.

Amy, however, even as she was dressed in her tole and preparing to preach about facing the violence and pain wrought in the wake of the shootings in Roseburg, Oregon, went out front with cookies and water and offered them to the protesters. She kept a warm smile on her face, she calmed congregants from our church who were getting hooked, and he re-channeled all of their darkness, returning it to them as love.

She told me later that she got within inches of one man as he yelled at her about being unfit to preach (yaknow, on account of the vagina and boobies and what-not), and in a calm, even tone, she said “I love you,” until he quieted down enough to hear her.

“This isn’t you, brother,’ she said. “I know you hear me. You’re a beautiful child of God, and I love you.” At that, the man stood there, blinking and stunned. He stopped yelling at her (granted he went on yelling at others), and she knew in that moment that she had planted a seed in him that wouldn’t soon leave him.

What’s more, a few onlookers who happened to be walking by during the incident wandered into the church after that to see what this church was all about that brought refreshments to protesters and told them they were loved. Period.

That, friends, is real evangelism. That is Gospel. That is being the hands, feet, mouth and heart of Jesus when it matters.

Visit Amy and our congregation any Sunday at First Christian Church, Portland, Oregon. Become part of the “Not That Kind of Christian” movement and support our campaign to help show the world what walking the path of love, humility and grace actually looks like. 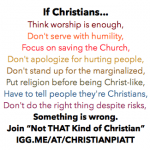 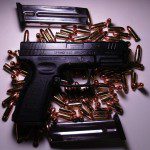 October 8, 2015 300 Million Guns Haven't Made Us Safe (and They Never Will)
Recent Comments
0 | Leave a Comment
"awesome."
Brandon Roberts Not “That Kind” of Christian
"nice article."
Brandon Roberts Talking Sex with Invisibilia’s Hanna Rosin
"Thanks for a fun romp. As a Presbyterian minister, I would have welcomed you gladly ..."
Zeigler John Leaving A-Holiness Behind
"Dear Sarah and Christian,I'm sorry for what has happened to you and your mother and ..."
Amazingaljicrowley3679 Letter From a “Demon Possessed” Woman
Browse Our Archives
Related posts from Christian Piatt