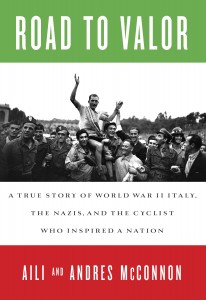 In Florence, Italy, July 1944, Tour de France champion Gino Bartali faced possible torture and death at the hands of the ironically-named Major Mario Carita. Though the military officer’s last name meant “charity,” his idol was a brutal killer: Heinrich Himmler, the Nazi leader in charge of Hitler’s Gestapo and SS.

Why was Bartali, a major Italian celebrity, being interrogated? As revealed in Aili and Andres McConnon’s Christopher Award-winning biography “Road to Valor,” the devoted Catholic led a secret life helping to save Jews from the Italian holocaust.

During an interview about the book on Christopher Closeup, Andres McConnon shared some of Bartali’s story.

Bullied as a child because he was small for his age, Gino identified with the underdog. He was first exposed to the growing evil of Fascism through his father, Torello, who was associated with an anti-Fascist labor movement that was trying to gain basic rights for workers who did backbreaking work for minimal pay. When one of that movement’s leaders was murdered by the Fascists, it was a sign that they wouldn’t tolerate opposition.

Torello told his son, “I defended an ideal because I wanted a more just world for myself and for others. And this is the result: they have killed my companions in faith and I have to hide my books and my opinions.”

Gino came to befriend a Jewish emigre from Russia, Giacomo Goldenberg, who fled to Italy to escape persecution in his homeland. Though Goldenberg was 16 years older than Bartali, the young Italian’s inherent feelings of wanderlust led him to admire the worldliness of his new friend. For his part, Goldenberg appreciated Bartali’s “welcoming spirit” after having experienced what real hatred feels like.

As Gino grew older, his proficiency at being an endurance athlete kept increasing, culminating in a Tour de France win in 1938. Even before that, his accomplishments had already drawn the attention of Mussolini and his Fascist propaganda machine’s efforts to create a “warrior people” through physical training.

In “Road to Valor,” the McConnon’s write, “Teachers became ‘biological engineers and builders of the human machine’…The Fascist regime was so adamant about controlling children’s athletic training that they even forbade other groups from being involved in this endeavor. The YMCA and various Catholic sports clubs were closed in 1927; the Boy Scouts were denounced as a ‘grotesque foreign imitation’ and shut down in 1928…Elsewhere in the country, a moral crusade was launched against the consumption of pasta, which was denigrated for causing ‘skepticism, sloth, and pessimism.'”

Bartali, however, resisted becoming a tool of the regime. Part of his reasons were due to his father’s experience with Fascism; the other was due to the Catholic faith he had practiced since boyhood, which stood in stark contrast to Mussolini’s principles.

Gino not only attended Mass regularly, prayed daily, and read about saints like Anthony of Padua and Therese of Lisieux, he joined a lay group called Catholic Action, which organized both religious and social activities for young people. Its members numbered 600,000 throughout Italy, and Bartali frequently spoke at meetings to share his faith’s role in his life and success.

This didn’t go over well with the government-run Fascist press who started mocking Gino for his piety. They couldn’t stop covering him, though, because he won races.

Though Bartali felt devastated when World War II derailed his sports career during his athletic prime, the situation led to a much darker reality for Italy’s Jews.

As Andres McConnon explained during our interview, “From 1939 to 1943, Italian Jews lived under strictures. Foreigners, including Jews, were interned in holding camps. Those shouldn’t be confused with the death camps that we know of in other parts of Nazi-controlled Europe. Then in the summer of 1943, chaos unfolds in Italy as Mussolini is taken out of power. For a while, Italy looks like it’s going to leave the war, and then the Germans are able to come into the vacuum that existed. There’s a dramatic liberation of Mussolini who’d been arrested, and then he’s reinstated into a puppet regime [where] a lot of the diehard Fascists realign with him. That’s when the Holocaust really comes to Italy with full force and it becomes as bad as it was elsewhere in Nazi-occupied Europe.”

Italy soon saw its share of Jewish refugees trying to hide their identities or escape into Switzerland. That’s when a vocal anti-Fascist and good friend of Gino’s, Cardinal Elia Dalla Costa, stepped up a secret operation. He would use the Catholic Church’s resources to deliver forged identity documents to Jews in the surrounding areas. One of those resources became an atheist printer named Luigi Brizi who, despite his general dislike of religion and the Church, joined forces with a local priest to assist in this endeavor.

Cardinal Dalla Costa asked Gino to help them as well. Despite the fact that he could be killed if he was caught, the cyclist agreed. He would roll up the false documents, hide them inside the hollow frame of his bicycle, and deliver them to a priest in Assisi.

For Bartali, this battle wasn’t just one of principle; it was also personal. His friend, Giacomo Goldenberg, and his family were also being persecuted. Gino hid them in an apartment he had bought with his cycling winnings.

With all that clandestine activity, it’s no surprise that Major Carita was alerted to suspicions about Bartali. Carita tried every trick and intimidation tactic he knew to break Gino, but despite being inwardly nervous, the sports hero played it cool and lived to continue his life-saving work.

Though you might assume that World War II’s end brought an end to Gino’s struggles, it was really the beginning of a whole set of new ones that included his own desire to be a sports champion again amidst an economically-depressed, materially-deprived and politically-divided populace that considered him a has-been.

Interestingly, Bartali never tried to re-establish his image by publicizing his integral role as a courier in the network that saved Jewish lives. Though he was proud of his athletic achievements, he remained largely quiet and humble about this more important legacy.

Regarding his hopes for people who read “Road to Valor,” Andres said, “Neither [my sister or I] is Jewish or Italian, but we were drawn to this story because it provided such an inspiring example of tolerance and cooperation. The anchor of the story is these three men from very different backgrounds: a professional cyclist, a Catholic cardinal and an atheist printer. And these three men crossed long-held traditional boundaries and joined together to save the lives of Jews during World War II. We hope our book encourages readers to think about how they can work with other people from different backgrounds and keep an eye out for those who are marginalized in our own era.” 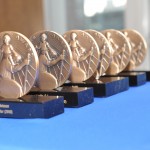 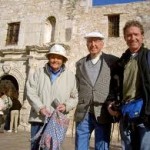 April 11, 2013 What's This 91-Year-Old's Secret to Living a Long, Healthy Life?
Recent Comments
0 | Leave a Comment
Browse Our Archives
get the latest from
Catholic
Sign up for our newsletter
POPULAR AT PATHEOS Catholic
1