A Modern Heir to St. Nicholas 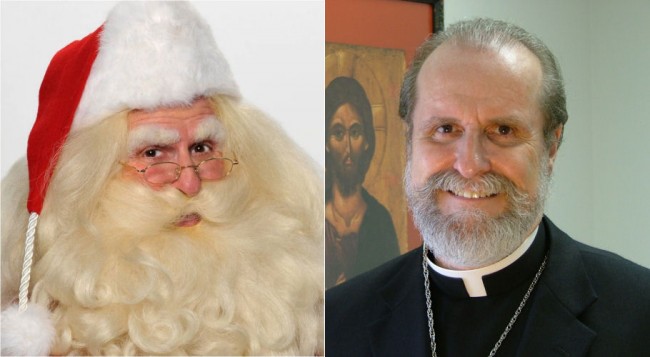 Father Joseph Marquis, not surprisingly, knows all about Christmas. But–and this is the part that might surprise you a little bit–he knows all about Santa Claus, too. At a time when many in the church downplay the role of Santa and the gifting tradition as symbols of all that’s gone wrong with Christmas, Father Marquis is something else. Not only does he embrace the concept of Santa Claus, but he makes use of the idea as a true teaching moment–about the real message of Christmas. Here’s how it all came about…

As a five-year-old boy growing up in Michigan, Joseph Marquis had a disappointing experience with a department store Santa. When his mother told him that it wasn’t the real Santa he’d seen but only one of his helpers, young Joseph had a ready answer: “Someday I will be Santa’s helper too.”

And that’s just what happened. He became a department store Santa himself, and he went at it in a big way–he also appeared in parades, wrote and illustrated a book about Santa, collected awards for the way he played the role, and finally made the Santa Claus Hall of Fame. But there was something else, too. He became a hospital chaplain and grew ever more interested in the church. At first he served as deacon, then entered the seminary, and today, at 63, he’s a priest–the pastor of Sacred Heart Byzantine Catholic Church in Livonia, Michigan.

Through it all he never lost interest in Santa or in his real-life counterpart, St. Nicholas of Myra. Finally, last year he launched an institute that provided professional Santa Claus training, in the spirit of St. Nicholas. As he told Maryann Gogniat Eidemiller, who wrote his story in Our Sunday Visitor, he did so because St. Nicholas embodies the love and grace with joy envisioned in the call of Pope Emeritus Benedict XVI for a Year of Faith, the ultimate inspiration for the course.

“Many of the 17 men who came to the symposium will probably never portray the historical figure,” Father Marquis said. “But for the first time in their lives they realized what they were entrusted with.”

He noted that St. Nicholas, a bishop known for giving gifts and who is the patron saint of children, served as the exemplar for the core values of the institute. Thought of as “the real Santa Claus,” St. Nicholas showed true compassion for the poor and forgotten, Father Marquis added. Thus the participants in the course (as Eidemiller wrote) should “treat children with the same integrity, sensitivity and unconditional love that characterizes jolly old St. Nicholas.”

Father Marquis said he hoped that all the professional Santas who came to the symposium would remain prayerfully open to the real spirit of Christmas. At its conclusion he blessed the participants and gave each one a replica of a bishop’s ring.

“In the prayer, I said that each was entrusted with the legacy of St. Nicholas and that while they are not shepherding a huge flock, they are shepherding small children, and that’s a very serious obligation,” the priest said.

“They all got choked up. It’s funny how St. Nicholas can read into the hearts of people.”

December 4, 2013
Reflections on the Advent of Christ
Next Post 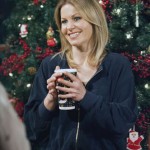 December 7, 2013 Candace Cameron Bure Talks Jesus, Santa, Parenting, Priorities and Purpose
Recent Comments
0 | Leave a Comment
"What was the name of the gentleman you were speaking to on CHristopher Closeup Sunday ..."
Katie Raggio Hossley Jimmy Kimmel Deserves an Emmy For ..."
"What a great article! Always loved the chracter and how it was developed from the ..."
Rick Malloy, S.J. The Catholic Church (and the Jesuits) ..."
"I loved the show and Father Francis John Patrick Mulcahy S.J played by the actor ..."
Fr.Ed Wade,CC The Catholic Church (and the Jesuits) ..."
"What a great tribute to a fine actor. As a Catholic I was never more ..."
RajunCajun The Catholic Church (and the Jesuits) ..."
Browse Our Archives
get the latest from
Catholic
Sign up for our newsletter
POPULAR AT PATHEOS Catholic
1